Gangster Jitendra Gogi arrested in Gurgaon along with 3 aides 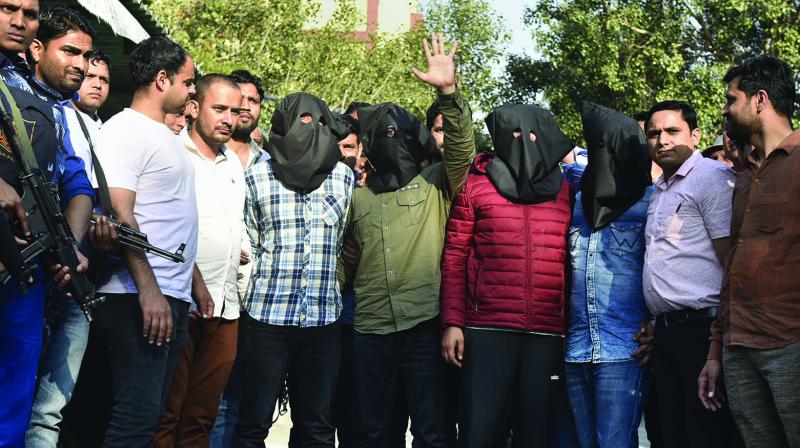 New Delhi: Delhi’s most-wanted gangster, Jitender Maan alias Gogi (29), who was carrying a bounty of Rs 6.5 lakh on his head, was arrested along with his three accomplices from Gurgaon on Tuesday.

In 2017, Gogi along with Fajja had pumped seven bullets into the chest of Harshita Dahiya, a famous Haryanvi singer, at Panipat in Haryana.

The Special Cell was on the trail of Gogi, Fajja, and Gaurav for a long time. On Tuesday morning, they were traced to Gurgaon and their hideout was surrounded, a senior officer said.

“The police got a tip-off on the intervening night of Monday and Tuesday and visited Kherki Daula Toll Plaza at Gurgaon in Haryana. When the police reached the toll, it got information that Gogi, along with his gang members, was living in a flat at Mapsko Casabella in Sector-82, Gurgaon,” DCP (Special Cell) Manishi Chandra said.

With a SWAT team, the police team moved towards Gogi’s flat. The police surrounded the entire B-4 block. Finding no escape route, they surrendered before the police.

The Delhi and Haryana police had announced a reward of `4 lakh and `2.5 lakh respectively for Gogi’s arrest. Fajja was carrying a reward of `2 lakh while Rohit had a bounty of `3 lakh.

Six imported pistols, over 70 live cartridges, and one Hyundai i20 car stolen from Paschim Vihar police station area, were recovered from the gang members.

The recovered car was used by the gang in the murder of a Pawan Anchil Thakur (32), who it suspected was supporting Gogi’s rivals, in Delhi’s Rohini last month.

The police is also questioning Gogi regarding his plan on Shrajeel Imam as in one of the Facebook IDs apparently being operated by one of his associates it was mentioned that Imam is a traitor as he was provoking people to break the country and the Gogi gang will eliminate and bring him to justice.