However, the encrypted system faced glitches and could not be tried on its first day of implementation. 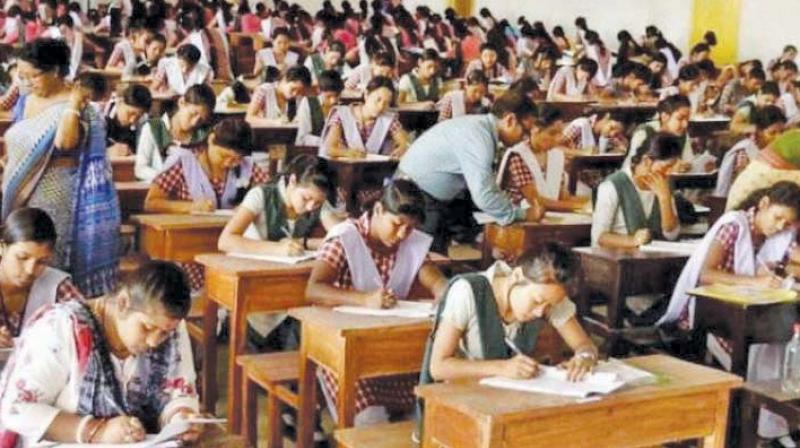 File image of students giving exams in a classroom.

New Delhi: The CBSE exams for Class 10 and 12 were delayed at a few centres in the national capital on Monday as the schools struggled to put in place the “leak proof” system introduced by the board after the leak of the mathematics and economics question papers.

Following the paper leak, the Central Board of Secondary Education (CBSE) had sent a note to all the examination centres in Delhi regarding the new system on Saturday with a set of ten instructions to be followed to implement the same.

However, the encrypted system faced glitches and could not be tried on its first day of implementation. Owing to this, there was confusion as students were made to wait and the exam started after its scheduled time. At some centres, the exams were delayed by over an hour.

“In the light of the recent developments, CBSE has devised a mechanism of providing encrypted question papers at the examination centres just before the commencement of an examination,” the note had read.

The instructions issued by the board to the centres included identifying a safe and secure room for installation of computers and printers and ensuring high-speed internet connection. All computer teachers/staff were supposed to report to the examination centre by 7.30 am on all exam days to handle downloading and printing of the encrypted question papers. The schools were also asked to arrange adequate A4 sheets — at least 10 pages per candidate. Under the new system, the question paper will be available on the CBSE website and the same user id and password, as used for registration, can be used. After downloading the zip file of the question paper, the centres have to use the password provided by the regional office minutes before and extract it. However, the schools could not follow the system, citing limited time and lack of resources.

Following this, the schools were informed by the board that it was back to the old system, in which the CBSE gets the papers printed at a designated printing press and send them in a sealed package to its centres, which is then handed over to the banks. Schools send officials to collect the papers from the banks. The change in the process at the last minute delayed the exams.

However, students were compensated for the lost time. The Class 10 students had language papers like Sanskrit, Urdu, and French whereas Class 12 students had Hindi on Monday.

The Union human resource development ministry has advised students and parents not to rely on rumours and to report to the CBSE if they come across any “hoax leaked papers” floated on social media.

Education secretary Anil Swarup said, “After the arrest of some miscreants and suspension of a CBSE official, all efforts are being made to ensure smooth conduct of CBSE exam today. Students and parents are advised not to rely on rumours. In the past, a number of hoax leaked papers have been floated. Inform CBSE helpline.”
Amid a nationwide outrage over the CBSE (Central Board of Secondary Educat-ion) paper leaks, the HRD ministry had, on Sunday, suspended one board official.