Some voters in villages and suburbs in the constituency claimed that they have not seen Parvesh Verma even once in past five years. 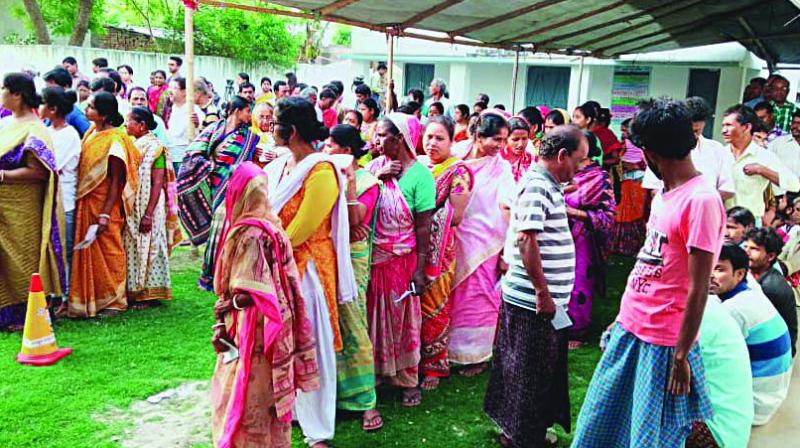 While the election campaign is gaining momentum, voters of West Delhi constituency are keeping fingers crossed to select their MP. (Photo: ANI)

New Delhi: While the election campaign is gaining momentum, voters of West Delhi constituency are keeping fingers crossed to select their MP.

The constituency, having sizeable chunks of rural as well as urban voters, is all set to witness a triangular fight between BJP, AAP and Congress. BJP has fielded sitting MP Parvesh Verma whereas Balbir Singh Jhakhar is the AAP candidate. While both are Jats, Congress is relying on its former MP Mahabal Mishra, a Poorvanchali.

However, availability of the MP in the area will be one of the key factors for people who will decide the fate of the candidates on May 12. Some voters in villages and suburbs in the constituency claimed that they haven’t seen Mr Verma even once in past five years.

“We have not seen him in last five years, we don’t even know where he lives. How can we vote for a person who we can’t even contact with in time of distress or emergency. He is just reaping the benefits of his father’s lineage and goodwill,” said a local shopkeeper who did not wish to be named.

A group of women who don’t even know the name of their candidates said they will vote for BJP only because of Prime Minister Narendra Modi and his stand on nationalism.

But one of the decisive factors will be the votes of Jats who have a stronghold in the area. A group of elderly people belonging to the Jat community of rural Najafgarh area, sitting next to hukka said: “We are in a dilemma as both BJP and AAP have fielded Jat candidates. Jhakhar is a native of Najafgarh while Verma’s father was a prominent Jat leader, we can’t decide right now.”