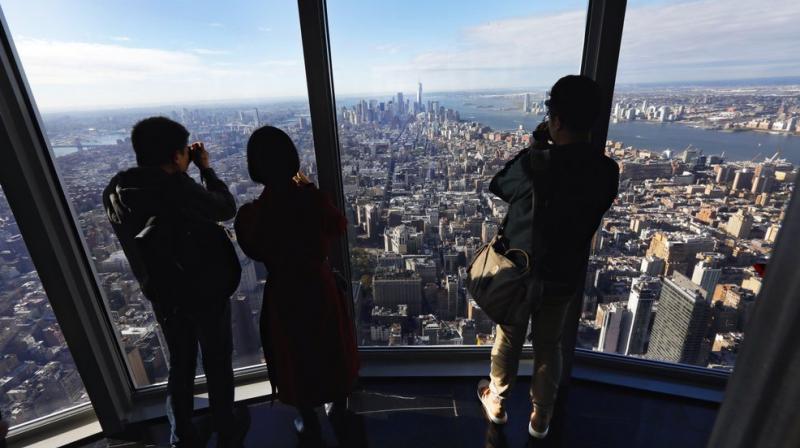 New York: The observatory atop the Empire State Building has a dizzying new look with floor-to-ceiling, 360-degree windows 102 floors above New York City. The remodelled observatory opens to the public Saturday. It was unveiled to the media Thursday.

More than 4 million annual visitors to the 1931 Art Deco skyscraper — about 60 per cent from abroad — will be offered an unobstructed view of the city and far beyond through panoramic floor-to-ceiling sheets of glass. They replace old windows that were half the size.

For a nocturnal view of New York, visitors have until 1:15 a.m. to take a new, high-speed, translucent elevator to the 102nd floor. Now visible from the interior on the way up are the building’s tower lights, whose colours change daily to celebrate holidays or people.

On the way up to the high new perch are an additional 10,000 square feet (930 sq. meters) of fresh exhibits, including a replica of the moving hand of King Kong, the monster gorilla in the 1933 film that climbs the building, plunging to its death amid an attack by Helldiver military planes. Also on display are photos of actors in movies shot there.

The USD 58 cost to get to the observatory at 1,250 feet (380 meters) above Fifth Avenue has not changed. But now, visitors are promised shorter lines that have often stretched out onto Fifth Avenue, spilling into an elbow-to-elbow lobby crowd before even getting into an elevator.

The entrance to the observatories has been switched to the side of the building on West 34th Street, where added security stations help move the crowd along. Tickets may be purchased at electronic kiosks installed only last year, in addition to online purchases.

The building also has remodelled its famous open-air observatory on the 86th floor, which still requires USD 38 ticket. Walls were opened between the interior space and the open-air terrace so city views emerge immediately after exiting the elevators. The four-year project cost $165 million and was financed by Empire State Realty Trust Inc.

Remodelling was a daunting task, said project manager Robert Krizman. Workers mounted metal baskets suspended outside the 103rd floor, wearing harnesses attached to the building. From there, they removed defunct broadcast antennas weighing 200 pounds each, jutting out from the top and bottom of the old windows. Their work station was an aluminium and wood cocoon ringing the 102nd floor for months while the old walls were demolished.