Mumbai-based adventurer Samar Farooqui is going all out to promote slacklining in India. 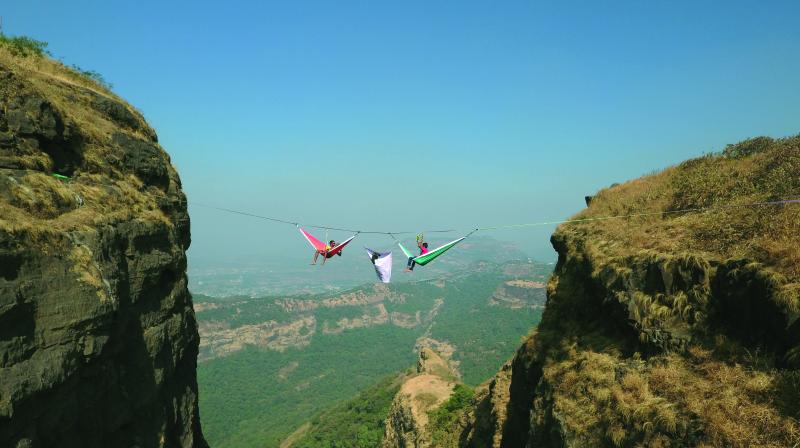 In August 2016, Samar organised the first tricklining event in India at Covelong point

Mumbai-based Samar Farooqui travels all over the country to promote slacklining and highlining, which are not so well known India. The 26-year-old has been practising slacklining for the last seven years.

“My mom, who was in the NCC, would take me to her camp and teach how to trek, read maps etc. While growing up, I was always surrounded by nature and that’s where the interest in adventure began,” he says, adding, “Right after my Class X, I started volunteering as an instructor at a trekking camp. When the organiser handed me a pay cheque, I realised that I can do something I like and still earn.”

Samar was introduced to slacklining in 2010. “While working for an adventure company, we had gone to buy new equipment and the person at the store handed us a slacklining kit, saying it’s something new. A few weeks later, on a trip near Alibaug, we tried out the sport. It was so simple — all you had to do was mind your body and try to balance. I started carrying slackline kits and with every opportunity that I got, I would set it up and practice,” says Samar.

He went on to pursue a course in Adventure Tourism Management in New Zealand. “I studied for two years and also tried my hand at various things — sky diving, photography etc., but one thing that remained constant was slacklining,” he says.

Samar runs a startup to promote the sport. “We are probably the only people in India promoting it,” he says and adds, “Slacklining is not a competitive sport. Tricklining is the only competitive form of slacklining, where one can do tricks like bounce, flip etc. on the slackline, instead of just walking.”

In August 2016, Samar organised the first tricklining event in India at Covelong point, where former cricketer Jonty Rhodes was the judge. “I taught him (Jonty) how to slackline,” he says. Samar also organised another event around New Year’s called Between Years to promote the sport.

“Slacklining is a small but growing sport. I represented India at Poland in 2014 at the Urban Highlining Festival. This year, I got an invite from Sweden to be a part of their international project. The idea is to go there, learn much more, come back and teach people in India,” he says, adding, “You cannot unlearn this sport. Once you learn how to balance, it will stay with you. In the beginning, it is about perseverance, although a lot of people learn it quickly.”

Samar has appeared on various TV shows including India’s Got Talent, Zee TV’s I Can Do That with Farhan Akhtar and MTV He Ticket, a travel show. “I taught Farhan Akhtar and Meiyang Chang how to slackline on the show. I even taught Raghu and Karan Kundra,” says Samar.