The lone, long fight against transphobia

The idea of sexual orientation being a choice is one of the strongest misconceptions that activists face. 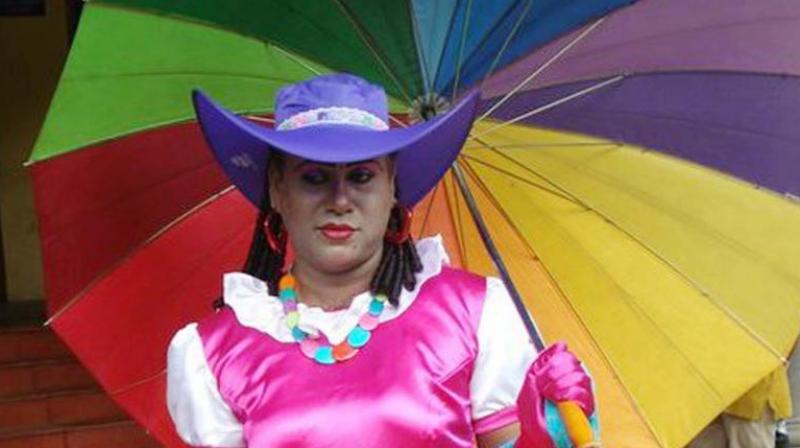 Sweet Maria is seen during the 2010 Queer Pride March in Thiruvananthapuram. The TG person was murdered in 2012 but the police did not bother to take it as a crime against a transgender. Media shied away from making a mention of her gender identity.

Thiruvananthapuram: The picture of Sweet Maria, wearing a sombrero hat and a bright rainbow dress, splashed on most newspapers during the state’s first queer pride march in 2010. Yet, when this prominent transgender activist was murdered in 2012, several media houses shied away from making even a mention of her gender identity.

The police did not slot Maria as a victim of transphobia though her friends suspect so. But the fact is the very act of blacking out of the news itself is seen as a form of transphobia.

Though there is difference in the media approach towards transgenders after Kerala announced its TG policy in 2015, mainstream society continues to isolate, denigrate and even unleash physical violence on TG persons. It was in February that a transgender person was brutally beaten up in Valiathura in Thiruvanan-thapuram district, but messages circulated on social media justified the violence, calling her “a kidnapper dressed in sari”. There are numerous examples of TG atrocities but they are often go unnoticed.

This week, a lesbian couple in Kozhikode, Gargi Harithakam and Naseema, suddenly found themselves on the street house hunting. They were told by their house owner that he would not have offered his house to them had he known that they were lesbians. Gargi took to Facebook, saying how despite the social privileges she was born into, she and her partner were facing social exclusion, even though everyone has an equal right to choose their partner. Her family also was not supportive of her relationship, according to her FB post.

Acceptance, not just awareness, from parents and family of people from LGBTQIA+ community is extremely important, says P.K. Prijith, founder, Queerythm. Surya, a member of the state TG Justice Board, says that the fact that the acceptance is not some benevolence but a right, should be drilled into people during prenatal and premarital counselling.

But many feel that awareness alone might not help.

“The state has a policy which recognises trangender persons,” says Queerala founder Jijo Kuriakose. “However, it has not translated into act or rules. If a transgender person faces an assault, a verbal abuse or a discrimination of any kind, in a public space or inside an institution, there is no clarity on what action can be taken against it. Moreover, even if there are rules, it has to be ensured that they are implemented. For example, in colleges, if the UGC anti-ragging policy, which is a Sexual Orient-ation and Gender Identity (SOGI) inclusive policy, is implemented, people can submit their complaints. But it is not being implemented.”

Here’s an example. A transgender student of a college in Thiruva nantha puram told DC that her collegemates talk disrespectfully about her gender identity but she would not complain as she is afraid that no action will be taken. Another: when hooligans launched an attack on a member of the state TG cell, it was revealed to the attackers that their victim was a transman. The information only worked to increase the intensity of the attack.

These incidents show the need for clear laws deterring discrimination on sexual and gender minorities. It might be worthwhile to remember that the SC/ST Atrocities Act came into being only in 1979, three and a half decades after independence. For, atrocities on Dalits were on the rise, even though India claimed to be moving forward.

Almost all LGBTQIA organisations are pushing for an amendment of IPC 377, which criminalises all homosexual acts. Maya Krishnan, a lawyer, says that the law belongs to an era when society was guided by Victorian morals. Recently a writ petition seeking the Supreme Court to reconsider its 2013 verdict ‘re-criminalising’ IPC 377 was referred to a Constitution bench.