400 metres away from the shore, and at a low depth of seven metres under the sea, the team eventually reached the shipwreck site. 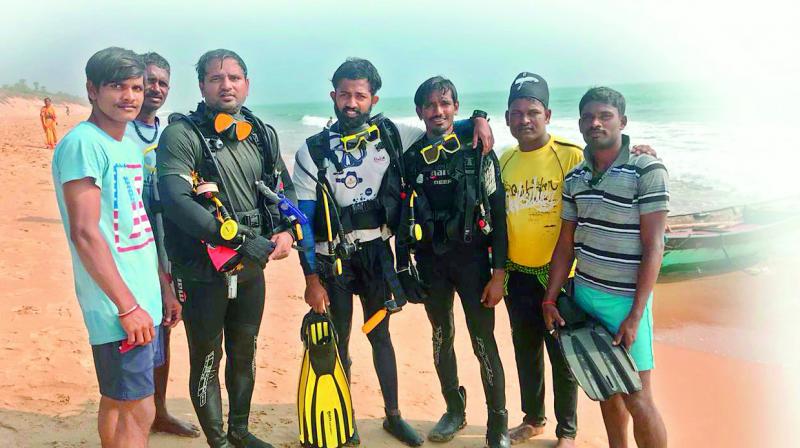 On a chilly wintry morning, while the city of Vizag was yet to get over from the celebrations of the Republic Day, Balaram Naidu, a retired Indian Navy officer and his team, has made one of the most stunning discoveries from this neck of the woods.

They apparently stumbled upon a 100-year-old shipwreck located near Baruva village in Srikakulam district of Andhra Pradesh state on December 27. This ill-fated cargo vessel, Chilaka, which belongs to British India Navigation Company, enroute Rangoon, reportedly sank near Baruva in 1917 in a fire accident that saw around 90 causalities.

Balaram, Director of Livein Adventures, a firm that conducts scuba diving courses in Visakhapatnam, operates in association with Andhra Pradesh Tourism. “We wanted to develop the surrounding beaches of Vizag, Vizianagaram and Srikakulam, etc., into a tourist destination and a major scuba diving hub. Moreover, scuba diving lovers would love to know about the history of wreck ships, etc., so we were scouting for a place for wreck ship,” reveals 42-year-old Balaram adding that one day, they saw a Red Flag tied to a boat and that is almost 40 metres away from the seashore near Baruva. The Red flag made them very curious.

“Upon asking the local fisherman, they revealed that the Red Flag area is a danger zone and several swimmers were drowned because of dangerous whirlpools. And for years, fishermen feared venturing into this zone believing it to be haunted and doomed,” he recalls adding that apart from gathering data about Chilaka vessel through various sources (online), the fisherman also shared information about the wreck ship.

400 metres away from the shore, and at a low depth of seven metres under the sea, the team eventually reached the shipwreck site.

“It was huge ship of around 150 metres long and around 20 metres wide,” reveals 25 year old P.R. Rahul, Dive Master, adding, “Since it’s been more than 100 years in the water the wreck was completely immersed in sand and fungus.” The entire exploration lasted for around 90 minutes, out of which the team spent around 45 minutes under the water to get a comprehensive view of the wreck. “The communication amongst four of us was through gestures and hand signals,” explains Rahul who adds that the team chose to venture into the sea around 10 am during high tides.

“That’s because the water levels are high and the sea will be calm. This means there are less surface waves and the sea roughness is also less,” shares Rahul, adding that since the wreckage spot was near the shore, the chances for surge currents were also high. “So the challenge was to ensure that we overcome the powerful currents,” he says adding that the dealing with the speed of the water near the shore flow was challenging.

The 23-year-old Satya-narayana Naidu, Advance Diver, who was also part of the team’s earlier two explorations at Chintapalli, states that they had breakfast before embarking on the exploration. “To stay hydrated, we drank a lot of water. We also carried dry fruits and citrus fluids and oxygen cylinders, gadgets like compass, GPS devices, and dive computer that indicate the water depth,” explains Satya who adds that the temperature was around 28 degrees at the wreckage spot.

For Advance Diver, Pappu Laxman Rao, there’s a great sense of gratification upon such discoveries. “Such discoveries will only boost our confidence further,” explains the 35 year old who further adds that they have not brought any wreck material to the shore. “We are not supposed to bring anything; our job is to only report to the Tourism officials about the matter,” he signs off.