‘The best stories are always the simple ones’

British novelist Jeffrey Archer speaks about Jane Austen, Brexit, and his persistence as a writer . 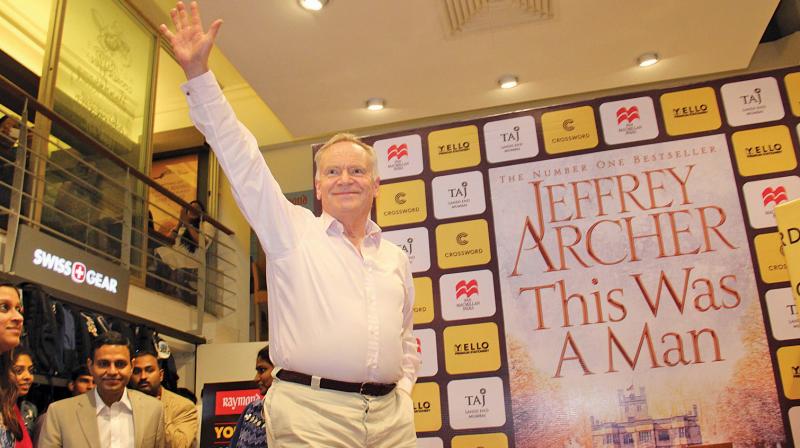 The author at a city bookstore where he interacted with his enthusiastic fans.

Jeffrey Archer is no stranger to Mumbai. The author has made multiple visits to the city in the past and this time around, he was here as part of his four-city tour, to launch the seventh and the final volume of his seven-book series, Clifton Chronicles. A rather enthusiastic bunch of readers welcomed Archer at a bookstore in town, where he indulged their questions, quirks and even posed for a de rigueur selfie.

Known for being a writer who builds characters in his books based on people he knows in real life, Jeffrey reaffirmed the idea. “Well, the Harry character is a lot like me in real life. Emma’s character is inspired from my wife, Mary and the wicked Lady Victoria’s character is based on four different women I know. One is a snobbish friend of mine. She is a good lady, but is frighteningly snobbish. The other is a wicked woman who did a friend of mine wrong — she stole a lot of his money when he was suffering through Alzheimer’s,” he adds.

Veering away from books and prose, the author also commented on politics, albeit in a very non-political, Archer style. “During Brexit, I had voted in whereas my wife voted out. When Donald Trump was campaigning for Presidential candidature of the United States, I was sure he’d never be a representative — so both these times, I was wrong again. Then, I was sure he’d never get elected. But, here I am — wrong again,” he jokes.

Quickly quoting Obama’s words he added that all said and done, one ought to give Trump a chance.

Interestingly, a lot of Archer’s fans in the house comprised of young readers. So naturally, the technological debate sprung up — what’s better, the book or the kindle? “I have read from a Kindle, and believe me when I say it is easy, but I have always preferred a physical book in hand where I can turn the pages,” he admits.

For those who wanted to know the secrets to good writing, Archer had a short story. Turning back the clock he said, “I started writing by chance; by sheer luck. At 29, I found myself in the House of Commons and in heavy debts. At 34, I got out and wrote Not a Penny More, Not a Penny Less, which struggled a lot in the market,” he recalls. He also admits that the reason he is where he is, is because of his perseverance. “When Not a Penny More, Not a Penny Less was published, it wasn’t doing well in the market. A few months later, they released it again, but in paperback format. They sold a few and asked to reprint a couple of thousands. They were sold out again and I phoned the publishers again asking them to reprint some more. I still have to do this, by the way,” he jokes. There is one book however, that he owes his all to —Kane and Abel, his 1979 best seller.”

And what about books that are yet to hit the stands? “I have been collecting short stories for over ten years now.”