Soft robotic fish swims alongside real ones in ocean

Existing autonomous underwater vehicles (AUVs) have traditionally been tethered to boats or powered by bulky and expensive propellers. 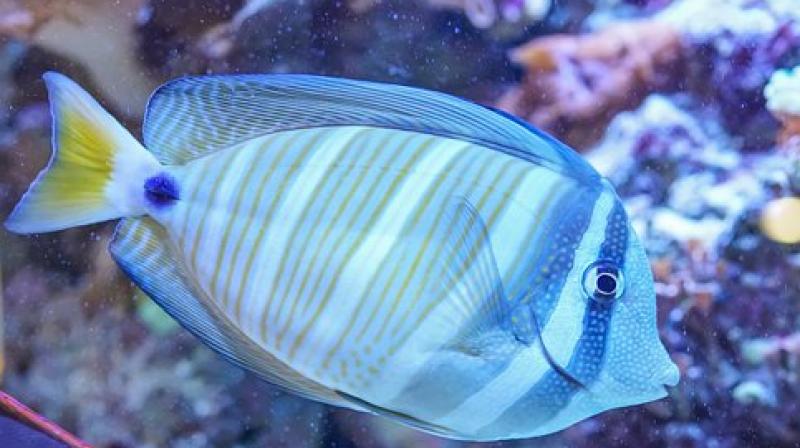 A robot like this can help explore the reef more closely than current robots. (Photo: Pixabay)

Scientists have unveiled "SoFi," a soft robotic fish that can independently swim alongside real fish in the ocean.

During test dives in the Rainbow Reef in Fiji, SoFi swam at depths of more than 50 feet for up to 40 minutes at once, nimbly handling currents and taking high-resolution photos and videos using a fisheye lens.

"To our knowledge, this is the first robotic fish that can swim untethered in three dimensions for extended periods of time," said Robert Katzschmann from Massachusetts Institute of Technology (MIT) in the US.

"We are excited about the possibility of being able to use a system like this to get closer to marine life than humans can get on their own," said Katzschmann, lead author of the study published in the journal Science Robotics.

Existing autonomous underwater vehicles (AUVs) have traditionally been tethered to boats or powered by bulky and expensive propellers.

In contrast, SoFi has a much simpler and more lightweight setup, with a single camera, a motor, and the same lithium polymer battery that is found in consumer smartphones.

To make the robot swim, the motor pumps water into two balloon-like chambers in the fish's tail that operate like a set of pistons in an engine. As one chamber expands, it bends and flexes to one side; when the actuators push water to the other channel, that one bends and flexes in the other direction.

These alternating actions create a side-to-side motion that mimics the movement of a real fish.

By changing its flow patterns, the hydraulic system enables different tail manoeuvres that result in a range of swimming speeds, with an average speed of about half a body length per second.

"A robot like this can help explore the reef more closely than current robots, both because it can get closer more safely for the reef and because it can be better accepted by the marine species," said Cecilia Laschi, a professor at the Sant'Anna School of Advanced Studies in Pisa, Italy.

"The robot is capable of close observations and interactions with marine life and appears to not be disturbing to real fish," researchers said.