US President Donald Trump’s trip to India brings out the creative best on social media — his Baahubali avatar stands out. 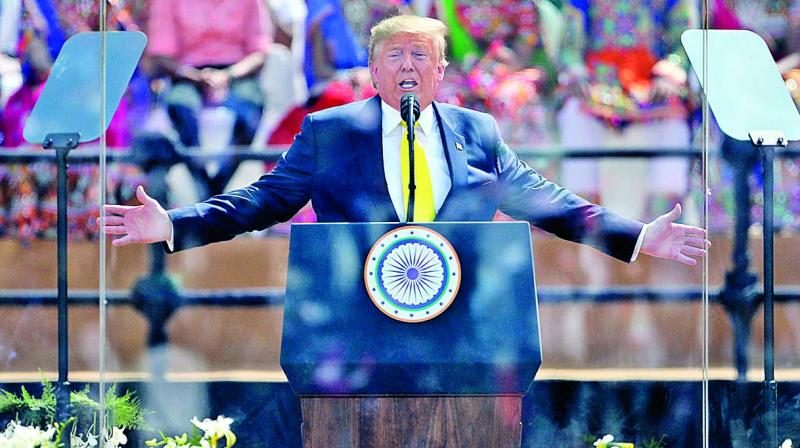 The US President Donald Trump’s maiden trip to India which concludes today is perhaps the most talked-about topic around lately. Internet users have been sharing memes on the newly erected wall that hides slums along the Ahmedabad motorcade route (Trump’s route).

Then are other social media users, who have expressed dissatisfaction on Trump’s delayed visit to India, wasting no time in coming up with funny memes with hashtags such as #IndiaRejectTrumpVisit

The funny man
However, even as Tweeples and giants of the comedy world carry on roasting the president and eating him up across different social media, one particular meme around his visit to India takes the cake. Deviating from his usual routine of posting tweets filled with accusations and disappointments about his Senate, the Democrats and generally anyone who does not toe his line, he chose to bring out his funny side.

Trump surprised his followers by re-tweeting an epic video edit of him riding a horse and battling hordes of enemies to one of the tunes from the Bollywood remake of a Tollywood super hit. Sharing the video, which was apparently created by one of his hard-core fans, the president said, “Look so forward to being with my great friends in INDIA! (sic).”

The video starts with the background music of the Bollywood remake of Baahubali: The Beginning. In this video, however, the President’s smiling face is morphed, rather shoddily, in place of the film’s hero’s. So there’s a smiling President with his orange face and golden hair leading his troops and then going on a massacre to bring peace to his kingdom. Soon, as the video progresses, the morphed hero can be seen walking, with long, purposeful strides, plucking a bunch of lotuses as he rides on his horse, and even romancing the love of his life…er… wife, Melania Trump, etc.