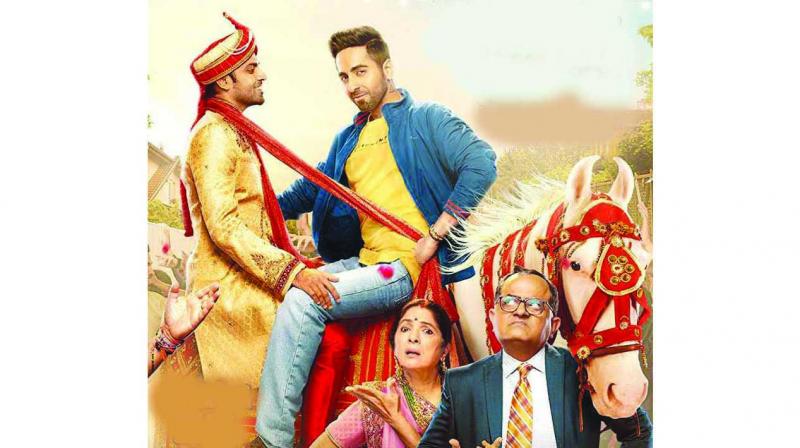 Donald Trump calling the mainstream Bollywood film Shubh Mangal Zyada Saavdhan “great” is proof that India has come a long way since Section 377 of the Indian Penal Code was read down. The Ayushmann Khurrana starrer has also started well at the box office, collecting around `20 crores in the first two days.

Both these instances can certainly be counted as a display of India and Bollywood’s newfound acceptance of homosexuality.

The first time Bollywood saw gay character was in 1991, with Anupam Kher playing Pinkoo in a film called Mast Kalandar starring Dharmendra. Since then, gay people have been used as a comic element in the film and made fun of. But 29 years later, Shubh Mangal Zyada Saavdhan opens up the frontiers for Bollywood, perhaps proving to be a Boys In The Band of sorts for our film industry. Boys In The Band was the first film in Hollywood to touch upon the subject of gay romance in 1970, 23 years after Kenneth Anger tackled homophobia in Fireworks (1947).

Of course, there have been others later like Love Simon, Ang Lee’s Brokeback Mountain, which led to America including the LGBTQI+ in mainstream cinema. There were also others like Milk, based on Harvey Milk, and J Edgar, based on John Edgar Hoover, as well.

However, many online reviewers are still not being able to accept a Shubh Mangal Zyaada Saavdhan in their midst, even terming it as ‘unfit for Indian audiences’ and ‘vulgar’ as well. This is indicative of India’s homophobic mindset still persisting to some degree. One can recall that Deepa Mehta’s 1996 film Fire, which had Shabana Azmi and Nandita Das in a lesbian relationship, took two years to release in India. The film even incited the Shiv Sainiks to give a dharna in their underpants outside screen legend Dilip Kumar’s house when he supported the film.

However, there have also been films like My Brother Nikhil, Fashion, I Am, Bombay Talkies, Loev, Margarita With a Straw and recently Aligarh and Kapoor and Sons which have spoken at length about the issue and tried to suggest inclusiveness. “Karan Johar’s Kapoor and Sons was a departure from his earlier films Dostana and Kal Ho Na Ho, where instead of turning a gay relationship into comic relief, the film gave a sense of respectability to the community, showing that the mindsets of mainstream filmmakers have changed,” says film historian and writer Imtiaz Baghdadi.

Kantaben in Kal Ho Na Ho and Mrs Acharya in Dostana — played by Sulbha Arya and Kirron Kher respectively — are the homophobic characters who contribute to the humour as they were under the impression that Saif Ali Khan and Shah Rukh Khan in the Nikhil Advani film and Abhishek Bachchan and John Abraham in the Tarun Mansukhani film were gay, but the truth was that they weren’t. The premise of the gay factor in these films was to induce humour through homophobia.

“Even before the gay characters came in, we had the effeminate characters played by Raj Kishore in Sholay, the nachyas from the tamashas shown in Marathi and some Hindi films played by Ganpat Patil, and then in Natrang by Atul Kulkarni. Those effeminate characters were not shown as gay but were used as a character to evoke laughter. But now they are not being used as a source of humour and their life stories are being told, which is a welcome sign that we are evolving, albeit a bit later then Hollywood,” says Baghdadi.

We reckon the next set of films on the subject won’t be called films on the LGBTQI+ community in case we are firm on inclusivity.