A green Diwali at last?

It looks like the campaign against firecrackers may have worked. 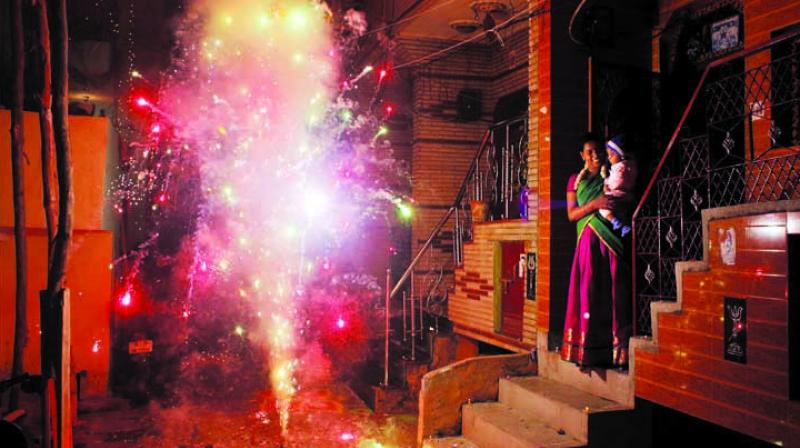 According to decibel levels recorded by Awaaz Foundation, there was less noise pollution in the run-up to Diwali and fewer crackers were used overall.

With every passing year, Diwali is often accompanied with talks of growing pollution. So this year, when the Supreme Court banned the sale of firecrackers in the Delhi-NCR region, Mumbai environmentalists demanded a similar ban in the city. But, Maharashtra environment minister Ramdas Kadam was keen on creating awareness on the harmful effects of firecrackers, rather calling for a complete ban. Surprisingly, the trick seems to have worked after the city witnessed a drastic drop in the demand and supply of firecrackers through the festive week. Much fewer crackers were burst on Diwali as well.

Understandably, environmentalists have been celebrating this slow but noticeable change. Sumaira Abdulali, founder of Awaaz Foundation, says, “It’s great that the citizens have realised the adverse effects of firecrackers. This year people have opted for low-decibel firecrackers, which is good news.”

Powai this time saw a 50 per cent to 60 per cent drop in the usage of firecrackers, explains V. Appukuttan from Young Environmentalists. “That is an impressive figure. I believe it is only because the younger generation is aware and concerned about environment.”

Appukuttan’s organisation conducted awareness programs in schools and encouraged children to spend their Diwali cracker-free. “We also requested parents to avoid buying firecrackers,” he explains, adding, “The younger generation should be taught about the ill effects of firecrackers because they are the target market for the firecracker shops. If we talk about its adverse effects now, our future is in good hands.”

Earlier this month, Bollywood celebrities like Sonam Kapoor, Yuvraj Singh and Masaba Gupta — although trolled for their opinions — encouraged citizens to say no to crackers. Nilesh Bhanage, founder of Plants And Animals Welfare Society (PAWS), says, “When celebrities and public figures spread messages through media, people notice it. Like every year, we approached celebrities to upload pet-friendly Diwali celebration posters on their social media handle to get people’s attention.”

Nilesh says that furry friends too had a peaceful year comparatively. “Very few opted for high-decibel firecrackers compared to previous years. Each year, we get about five injury cases. However, this time, we have got just one case. This is good news since it means that there was very little discomfort for strays this year,” he added.