Television watching is passe now. In the modern era, millennials are hooked to their favourite programmes online. 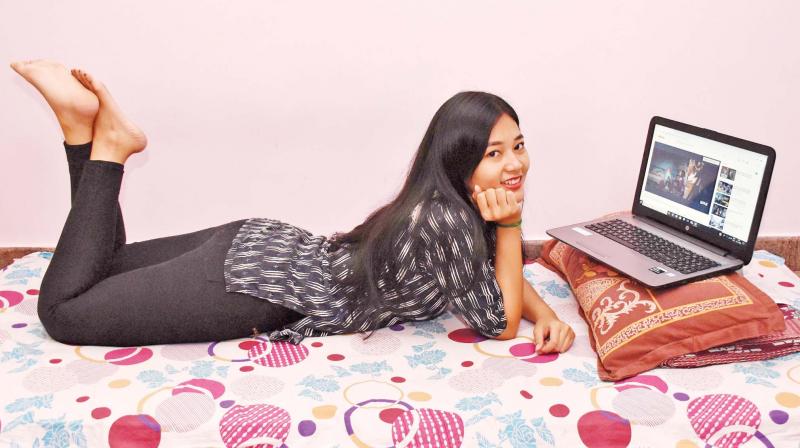 Karishma poses for a representational photograph for the story.

Having spent a childhood fighting for the TV remote from our dear siblings, sometimes parents and even grandparents, does it come as a surprise how swiftly we allowed ourselves to be bowled over by online shows and web series?

Well, ‘no’, say the elderly and youngsters alike. They have switched to watching online shows, series, videos and news when opposed to the usual TV time they granted themselves. The reasons vary from the options available to time constraints.  We find out more...

Tiju Chacko (32), business head at Fresher’s World is one of those who is happy to have made the change but yearns for that family time and goes back for it. He says, “After a tiring day at work, when I head back home, it is nice to be able to watch what I want to rather than having to watch what is available. If I was to head back home with the intention of watching a movie on TV, I would have to stick to the time it is being telecasted and move work around accordingly. As someone who likes the genre of thriller more than anything, my options are also very limited. While online, with the click of a button I can watch what I want at the place and pace that I wish. But I do miss the time we spent as kids in front of the television with the family. We do make a conscious effort to relieve that once in a while.”

Zeeshan, a payments processor at HSBC likes being practical about it. “A good majority of my childhood was spent in fighting for the remote with my brother. The end result being my mum turning the TV off to punish the both of us, leaving us with absolutely nothing to watch. This is more convenient; there are no ads, I can watch what I want when I want, there are plenty options I can choose from, and the best part, I’m not fighting with anyone. I hardly watch TV anymore except for when there is a match being screened.”

As a city that boasts of the best IT sectors and educational institutions, we are home to many migrants who travel to a new place to chase their dreams. For them the switch was a response to the question of availability.

So says, Karishma Gurung, a MA student from Jain University. “I am from Goa. I came to Bengaluru to pursue my higher education. I stay in a rented house with a friend. It is not possible for us to buy a television to keep ourselves entertained. Moreover, we already have our phones and laptops which can fill in for it. So, the easier option was to watch show and series online rather than burning a hole in our pockets to buy a television that we don’t have the space for.”

If you thought that the oldies will resist the change, you’ve got it all wrong! They are using this opportunity to get familiar with new age technology.

Divine Babu, a law student from National Law School, says, “My dad was never fond of watching TV because he never liked the shows or programmes that were aired. When he was first introduced to Netflix, he was apprehensive but he was willing to give it a shot. Considering how user friendly it is, it did not take him too long to learn to manage it either. Now he watches shows and videos not only on Netflix but various apps and mediums online.”