The couple are tying the knot at St George's Chapel at Windsor Castle. 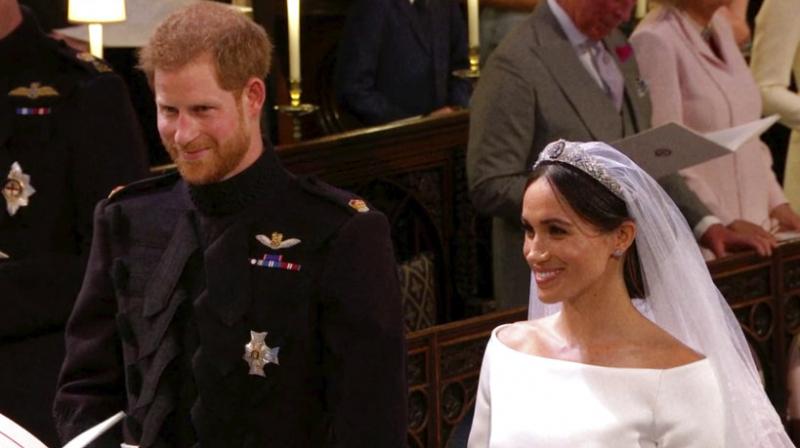 The pair have invited 2,640 members of the public to their wedding, including 1,200 people who have demonstrated strong leadership in their communities. (Photo: AP)

Prince Harry and Meghan Markle are all set to say their vows today. The couple are tying the knot at St George's Chapel at Windsor Castle and the young prince and his US bride will marry at midday and at 1pm. They will travel through Windsor in a carriage to greet the thousands of people expected to turn out for the big day.

The pair have invited 2,640 members of the public to their wedding, including 1,200 people who have demonstrated strong leadership in their communities.

Here are the live updates:

5.11pm: 'I therefore proclaim that they are husband and wife'. The Archbishop joins their right hands together and says: "Those whom God has joined together let no-one put asunder." The couple are now officially married!

5.09: The couple is exchanging rings. Prince Harry places wedding ring on Meghan's fourth finger of left hand. Markle now does the same before the Archbishop of Canterbury addresses the congregation.

5.08pm: The couple is exchanging vows. Archbishop of Canterbury is leading vows.

5.03pm: Ben E. King and choir sing Stand By Me at the royal wedding.

4.58pm: Curry says redemptive love changes lives he says. “When love is the way we actually treat each other like we are actually family," he goes on to add.

4.52pm: Most Rev Michael Curry, the first black presiding bishop of the Episcopal church in the US commences reading a sermon.

4.49pm: Doria Ragland is seen becoming emotional as she watches her daughter become a duchess

4.42pm: The first hymn being played in the wedding is Lord of all Hopefulness. Harry can be seen singing along.

4.41pm: Couple hold hands and exchange smiles once more as the Rt Rev David Conner, the dean of Windsor conducts the service.

4.36pm: Markle walks up aisle and exchanges smiles and a few words with Harry. Both looked relaxed, happy.

4.31pm: Meghan Markle arrives at St George's Chapel. The bride to be is wearing a traditional dress.The dress was designed by Clare Waight Keller for French fashion house Givenchy.

4.30pm: The bridesmaids, including one who is just two-years-old, and flower girls have arrived. Markle’s car is approaching.

4.23pm: Prince Harry looks a bit nervous awaiting his bride. Meanwhile, the mother of bride is in the chapel as are Prince Charles and the Duchess of Cornwall.

4.10pm: Prince Harry and Prince William head down the aisle. Both are wearing the frockcoat uniform of the Blues and Royals after the Queen gave Harry permission to get married in his uniform. Both uniforms have been tailored at Dege & Skinner on Savile Row.

4.03pm: Guests already in place for the wedding.

3.59pm: Meghan Markle on her way to St George's Chapel. She is wearing a veil, the dress has a high neckline and her shoulders are covered. They are travelling in a Rolls-Royce limousine, loaned for the day by the Queen.

3.35pm: Prince William and Prince Harry to arrive in half hour

3.32pm: Once left out, Fergie arrives for the wedding.

3.11pm: The Band of The Irish Guards starts providing music for the crowds as the guests turn up in fineries.

2.56pm: The Earl of Spencer, Prince Harry’s uncle has arrived. George and Amala Clooney arrive to the wedding.

2.55pm: The Duchess of Cambridge's family, including her parents Michael and Carole,  brother James and sister Pippa, have arrived for the royal wedding.

2.35pm:  Details of the wedding rings have just been announced. They have been made by Cleave and Company. Meghan’s wedding ring has been fashioned by a ring made of Welsh gold and Harry will wear a platinum one.

2.31pm: Diana’s former butler has arrived at the wedding, opting for a lounge suit rather than full top hat and tails for the occasion.

1.15pm: Guests including Oprah Winfrey, actor Idris Elba and Earl Spencer, the brother of Princess Diana, have arrived at St George’s Chapel for the wedding.

1.14pm: Theresa May sends her 'best wishes' to couple. The official 10 Downing Street Twitter account posted a message to the couple from Theresa May, saying, "My very best wishes to Prince Harry and Meghan Markle on their wedding day. To all of those joining the national celebration with street parties and other events, have a wonderful day. "

1.11pm: The newly styled Duke of Sussex is on his way to church from his the hotel where he spent his last night as a bachelor.

Here's are a few pointers: