Can’t really shake it off 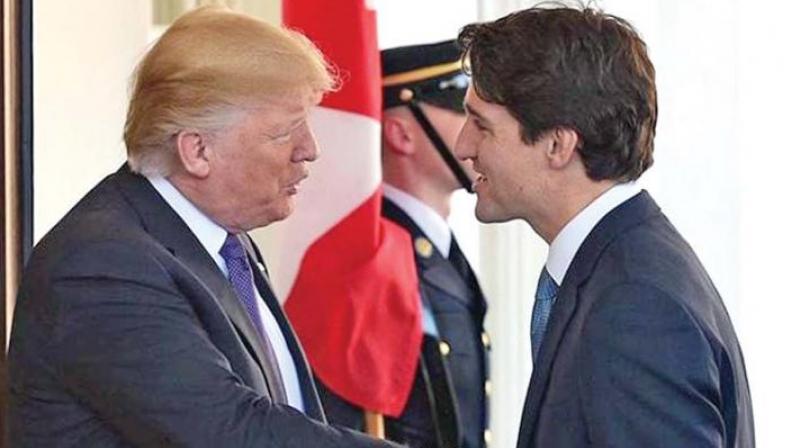 The world of politics is like a roller coaster ride. It has been evident since the new year began — both in the international and local scenario.

During this time, people noticed something about President Donald Trump that went viral. His handshake is a strange and tactical way of showing dominance over other officials he meets — it involves pulling the person towards him while he shakes his/ her hand. But recently, the Canadian PM, Justin Trudeau, came prepared and held his own, while Trump tried his usual handshake again!

The buzz that the video clip of the incident created, makes us wonder if Indian politicians, especially those in our state, have distinct body language that they consciously or unconsciously display.

Psychologist Sneha Hindocha explains, “When people talk, only seven per cent of what they convey comes through their words, the rest of the 93 per cent comes through their body language — like posture, eye contact and verbal cues such as pausing and voice modulation. When some politicians stand with their hand crossed behind their back, it generally conveys that they are unsure of what they’re saying or are hiding something. With Trump, the yanking and even his hand facing down shows an authoritative and domineering personality.”

She goes on to talk about what she has observed with our own politicians. “When Sasikala  was making a speech about Amma’s demise, she didn’t make much eye contact and didn’t have a soft gaze — this was not in co-ordination with the event. She also uses her index finger to point out something while she speaks — it is an accusatory stance,” Sneha muses.

Elvina Starr, the founder of Haskalah Academy and a trainer in body language, has a different opinion. “If you observe how Mr. Trudeau took on the famous ‘yank-shake’ of Mr Donald Trump, you will realise that he was well prepared. He went in for the kill with the ‘alpha shoulder grip’. This is one interesting skill I always train my students in —  to counter a dominant handshake. I can’t help but draw comparisons while I watch clips of our elected MLAs when they interact with each other. It might seem very strange to the outside world when they see ‘powerful’ men stand with folded arms before their leaders, prostrating before people who hold the key to their future. I feel it stems from a society that was always dominated by caste system — when the lower caste stood bent with arms folded before a higher caste individual.”

Dr Ramu Manivannan, who has taught politics and public administration extensively shares, “Body language displays the intent of a person. It conveys one’s confidence and is an expression of personality. It is also communicative of the state of mind. When Fidel Castro visited India, instead of shaking hands with Indira Gandhi, he gave her a warm hug, but she shrank. That could be because of cultural differences.”

Dr Ramu goes on to say, “In the case of J Jayalalithaa, even when she was angry, she never expressed it via body language and was calm most times. I think that matters a lot when it comes to politics.”

When it comes to actors donning the roles of politicians in Tamil cinema, there cannot be many better examples than Arjun’s role as Pugazhendi in Mudhalvan. Speaking about how he prepared for the role as the Chief Minister of Tamil Nadu, he says, “When Mr. Shankar told me the story, I asked him if I would fit the role — he said that since I have acted in many patriotic movies and as I have a clean image, I would do justice to the character. I then started doing my homework — and it was also the first time I did the role of the CM. I understood that a person, who has such a huge responsibility, has to be dignified, matured and balanced. Hence I brought in all these elements. And if you watch the movie again, you would realise that I had two different shades — initially, as a journalist, while I conduct interviews, I look a little nervous, but once I’m asked if I’m ready to be the CM, I say ‘yes’ confidently. And the transformation begins.”

Sharing with us if he observed the mannerisms and body languages of any particular politician for the film, he says, “We’ve seen many big leaders over the years — I tried to use showcase many of their distinctive traits. According to me, irrespective of them being good or bad, leaders are leaders. And their body language and the way they carry themselves say so much about their personality. I think a person who emotes too much can’t be a leader — he/she should more be of an observer, be dignified and take decisions with clarity.”

(With inputs from Balajee CR)