Life   More Features  18 May 2018  Huge asteroid to skim past Earth a day ahead of royal wedding
Life, More Features

The day before Prince Harry and Meghan tie the knot at Windsor, an asteroid is expected to come extremely close to the Earth’s surface. 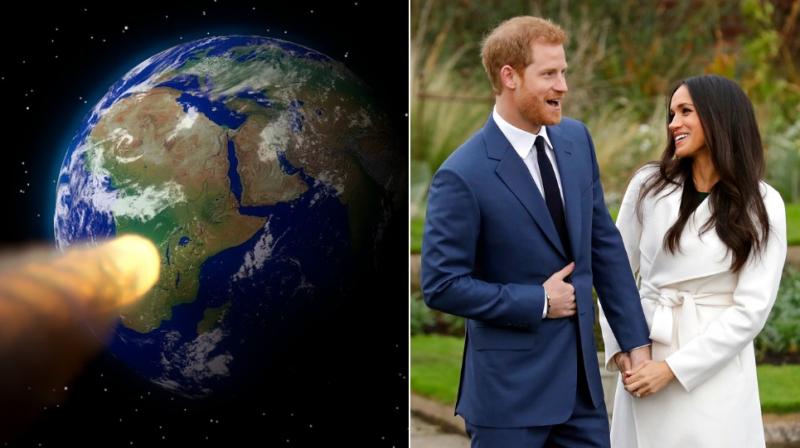 It’s not the only object threatening life on the planet as we know it as in just over a week’s time an even bigger asteroid is expected to fly past the Earth.

The royal wedding is almost under threat from a giant asteroid heading towards Earth, Nasa has revealed.

The day before Prince Harry and Meghan tie the knot at Windsor, an asteroid is expected to come extremely close to the Earth’s surface. The asteroid called JPL 8, is due to fly past the planet around 2.21am Friday morning.

JPL 8 is estimated to be roughly between 49 and 110m in diameter, or about the size of an average football field. It is heading towards Earth at a rapid speed of 13.9 kilometres per second or more than 3,000 miles per hour.

It’s not the only object threatening life on the planet as we know it as in just over a week’s time an even bigger asteroid is expected to fly past the Earth.

This asteroid, categorised as a 2018 GL1, is roughly 68 metre-wide and will speed by on Saturday morning approaching as close as approximately 14.3 Lunar Distances from Earth, or more than 3 million miles.

Around 100,000 people are expected to gather outside Windsor Castle on Saturday May 19 for the wedding, but they can rest easily, because by the time Harry and Meghan exchange their vows at St George’s Chapel, the asteroids will have safely flown past our planet.

Even though hundreds of asteroids come relatively close to Earth every year, only a few of them come close enough to be considered a Near Earth Object (NEO) threat by NASA.

2018 GL1 is technically a NEO but the chances of it hitting Earth are very small. NASA said: ‘Every day, Earth is bombarded with more than 100 tons of dust and sand-sized particles. ‘About once a year, an automobile-sized asteroid hits Earth’s atmosphere, creates an impressive fireball, and burns up before reaching the surface.

‘Every 2,000 years or so, a meteoroid the size of a football field hits Earth and causes significant damage to the area. ‘Only once every few million years, an object large enough to threaten Earth’s civilisation comes along.

‘Impact craters on Earth, the moon and other planetary bodies are evidence of these occurrences.” Roughly 14 asteroids are due to fly past Earth this month alone, with the next one approaching Earth, called 2016 JQ5, expected to fly past the planet today.

However stars do not seem to be in favour of Meghan Markle who has been distraught over the absence of her father to her wedding to walk her down the aisle.

Thomas Markle has said that a heart surgery has left him unable to come and he has given his ‘blessing’ to Markle’s mum to do the honours.

Kensington Palace issued a statement on behalf of Meghan stating,