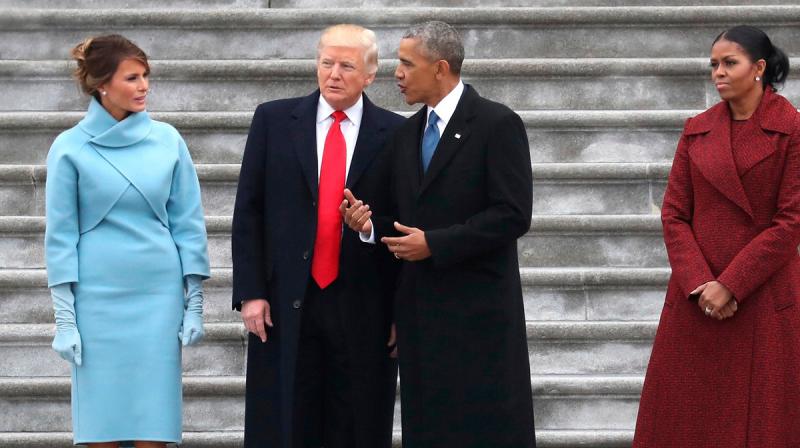 Barack and Michelle Obama indulged in some romantic public display of affection on Twitter while Melanie and Trump's timeline remained cold. (Photo: AP)

One of the two, undoubtedly one of the most beloved couples, Barack and Michelle Obama indulged in some romantic public display of affection on Twitter on Valentine's Day.

The former president and his wife have always been very vocal about their affections for each other and it turns out that Valentine’s Day was the perfct occasion to showcase their love for each other.

Michelle dedicated a Valentine's Day playlist on Twitter to her husband who is her "one and only".

To this the former president replied by tweeting a picture of the two embracing in front of what looked like a glorious vista from a countryside. He also said that his wife "makes every day and every place better".

In fact, recently while at the unveiling of their official portraits for the Smithsonian's National Portrait Gallery, Barack Obama complimented artist Amy Sherald for her striking and unconventional painting of his wife and also joked about Michelle's 'hotness' that was captured by the artist.

On the other hand, interestingly, President Donald Trump and his wife Melania did not tweet anything for each other on Valentine's Day.

Melanie Trump looked festive in a USD 2,995 Calvin Klein wrap coat as she played cupid to exchange Valentine's Day cards with young patients at the Children's Inn at the National Institutes of Health.

While, the first lady shared her excitement on Twitter before her visit, tweeting: 'Looking forward to a very sweet afternoon visiting @theChildrensInn & celebrating Valentine’s Day with some kids at @NIH! #HappyValentinesDay’, it was noticeable that she had no words of affection for her husband, the President.

Soon enough, people were quick to read into Melanie’s tweet with many pointing out that she didn't wish her husband a happy Valentine's Day.

'Absolutely love that she doesn't even mention her husband,' a woman named Alexandra tweeted.

She went on to say that Melania's tweet really means: 'Happy Valentines Day to everyone except my flabby wet baby of a husband, who I hate.'

One Thomas joked, 'In our country, we traditionally spend this day with our spouses. Problems at home?'

While Peter Cassizi wrote, “Hey @realDonaldTrump - this is what they call a totally deserved burn from wifey.”