Meghan, Harry’s wedding feast will not be seated affair

Guests will be standing up in St George’s Hall at Windsor Castle when they are served ‘mini main courses’ made by Queen’s kitchen staff. 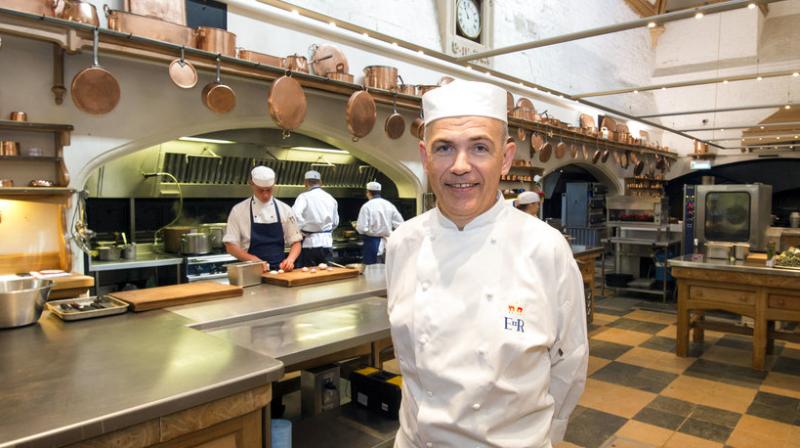 Royal chef Mark Flanagan is leading the 30-strong catering team and said, “The day of the wedding has fallen very kindly for us.” (Photo: AP)

According to new information, Prince Harry and Meghan Markle will not have a sitdown wedding breakfast after their ceremony on Saturday. Instead, the couple have plumped up for a trendy ‘bowl food’ instead.

The guests, 600 of them, will be standing up in St George’s Hall at Windsor Castle when they are served seasonal ‘mini main courses’ made by the Queen’s kitchen staff.

Bowl food has become a popular choice for business events because it is more sociable, allowing guests to mingle and network while eating.

However, it is a surprising choice for a royal wedding.

Harry and Meghan hope that it will make the occasion less fussy and allow them to move around the room greeting as many guests as possible.

Sources also say that guests will feast on canapés during lunchtime reception, which will last around two and a half hours and includes speeches and cutting of the cake. Each morsel has been crafted to be consumed in just two delicate bites.

The Queen is officially hosting the event and Buckingham Palace staff revealed that the menu would comprise ‘classic dishes’ made from seasonal British produce, much from the monarch’s own estates.

The couple apparently visited Windsor Castle to sample menu suggestions in the Great Kitchen, which dates from the reign of the 14th century monarch Edward III.

It is believed to be the oldest working kitchen in the country, having served more than 30 monarchs.

Royal chef Mark Flanagan is leading the 30-strong catering team and said, “The day of the wedding has fallen very kindly for us.”

He went on to add, “We know the couple wanted us to make sure we used all of the local seasonal produce as much as possible throughout their menu, and this recent good weather is really helping us to achieve that.”

He added the couple have been involved in every detail.

Notably, Meghan is a keen ‘foodie’ who used to run her own lifestyle website, which featured her favourite recipes and restaurants and shares a love of organic produce with her future father-in-law, Prince Charles.

A separate dinner for 200 is being held at Frogmore House by the Prince of Wales later in the evening.