A cause with a sole

The organisation also conducts footwear collection drives across the country. 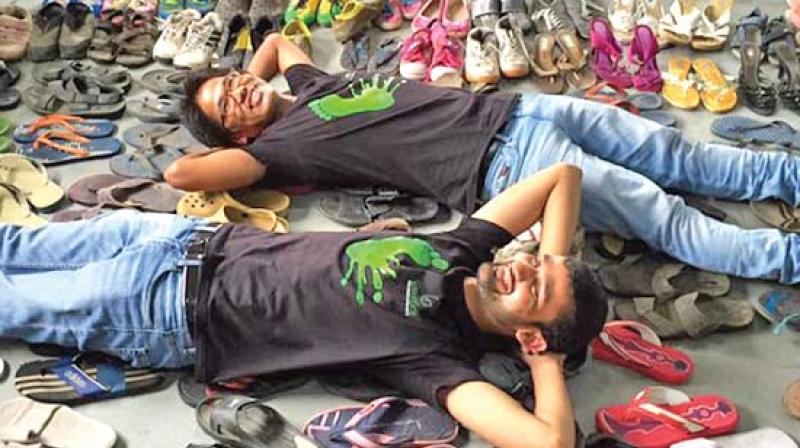 GreenSole, a social venture, refurbishes old, discarded shoes and donates them to children living in rural India. They share their journey, challenges and more.

While shoes are such a common sight in metros that most take them for granted, there are many across the globe that cannot afford even a single pair. At the young age of 19 and 21, two athletes, Shriyans Bhandari and Ramesh Dhami, realised that they could take the huge number of discarded old shoes and upcycle them into functional footwear. The duo realised that their idea was not only environment friendly and economical but could also do good for the society.

It was through hardship that Ramesh came up with the first prototype for the shoes. Like many who come to the city of dreams to become actors, Ramesh came to Mumbai at the age of 14, with lofty aspirations, and took up odd jobs to get by. However, he soon realised that the cut-throat competition of the film industry was not for him. After spending almost one and a half years on Mumbai footpaths, he associated with an NGO — Saathi — where he was given career guidance and counselling. “I found interest in running and adventure sports. Every Sunday, there would be a road run competition and I would try my best to win it for the cash prize. Everything was going fine until my brand new shoes tore from the side. I had spent a major chunk of my savings to buy those shoes. I tried to fix it using glue, but it didn’t work. So, I made use of the shoe sole and turned it into a slipper. I used that upcycled slipper for a year and I have still kept it safe as a memory because that’s what gave a kick to my career,” he reminisces.

Ramesh and Shriyans had the same running coach, and that’s how they met. Soon, Ramesh shared his idea with Shriyans and they showcased these shoes in a few competitions. Recalling their inception, Shriyans says, “The real journey for GreenSole began in April 2014, when we participated in Entrepreneurship Development Institute Of India (EDII) and we were amongst the top 30 innovators. Through competitions, we managed to collect Rs 5 lakh and my family supported us with Rs 2 lakh for initial capital investment.”

The duo set up a small unit at Thakkar Bappa Colony in Kurla, and also managed to convince the traditional cobblers to help them refurbish old shoes. While most refused to touch the old shoes, a few stepped forward. With the small set up and almost no expertise, they manufactured 50 pair of shoes everyday. Later in 2015, the two approached Ram Exports, which has been in the footwear industry since 1964. Shriyans says, “We had no expertise until Ram Exports came into the picture and backed us with space, designing and manufacturing of the shoes and technical guidance.”

What started as a small project in December 2013, has top companies like Axis Bank, Just Dial and JLL supporting the cause. These companies conduct shoe collection drives in their offices, and pays GreenSole to refurbish shoes and donate them in the rural parts of India. The organisation also conducts footwear collection drives across the country. “So far we have donated shoes in 11 states like and we are willing to reach even more rural and isolated parts of the country so that the kids don’t have to walk bare foot,” Shriyans signs off on a hopeful note.