‘All is well’ time for IIT Delhi

While IIT Delhi has declared about the curriculum change, students mention that haven’t heard much about it from their professors. 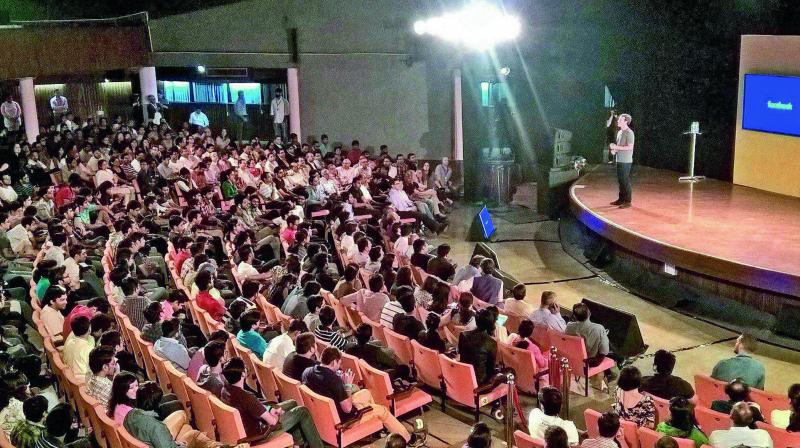 A file photo of an ongoing session at IIT Delhi (Photo: PTI)

As IIT Delhi plans to change its curriculum to being more hands-on and less theoretical, students talk about how if it would help reduce academic pressure on them.

Saari umr hum, marr marr ke jee liye, ek pal do ab humei, jeene do, jeene do... The song (from Raj Kumar Hirani’s 3 Idiots) might be a tad old, but it continues to represent the plight of engineering students in India. Just as was shown in the film, we had a ‘Joy Lobo’ incident at Indian Institute of Technology (IIT), Kharagpur last Friday (May 5), where a fourth year student of aerospace engineering allegedly committed suicide because of high stress and mounting depression.

What might seem incidental to the case — IIT, Delhi recently decided to revamp its curriculum by making it “less theoretical and more hands-on”, in order to reduce suicidal tendencies amongst students. The move comes against the backdrop of HRD ministry asking all IITs to take new initiatives, in addition to the existing measures, to stem the trend of student suicides.

However, the attempt garners a mixed bag of responses from the students. While some believe that hands-on experience in the curriculum is not in any way related to suicidal tendencies, others support the idea of having a curriculum with lesser academic pressure.

“One comes to IITs after two years of rigorous pressure in school, expecting a comparatively lesser academic pressure. But what happens is exactly the opposite. There is so much competition. Alongside academics, we have to make sure that we involve ourselves in co-curricular activities because they are extremely important for our jobs. But the focus here is only to get good grades. We eventually realise that we learnt very less and instead, wasted a lot of time here. Having a more practical curriculum will help us enjoy the course more,” says Deepak.

The 18-year-old feels that his dream college is nothing like what he had expected. He complains of monotony and not getting a chance to actively participate in co-curricular activities.

“Curriculum change will be good for each and every student of IIT Delhi. In my first year, I saw that all students are concerned about each other’s grades and scoring better than others. It is very less often that we are all chilling or having a good time. Changing the curriculum will probably help us a lot as we will focus more on growing with knowledge,” he says.

A third-year-student of chemical engineering however stands wondering how suicidal tendencies are related to curriculum changes.

“I don’t see a direct correlation between the two. However, it is a very important step because we engineers need to know the practicality of things. Every time we go for internships, the first one month is spent in only understanding the practical aspects of things which we are not taught at all,” he says on the condition of anonymity.

About handling curriculum pressure he says that even though IITs don’t propagate pressures explicitly, they still exist. Going out for a casual hangouts or talking about the pressure among friends or reading philosophy or simply sleeping over things helps them deal with the pressure.

He adds that there is a counselling advisor in IIT Delhi but students don’t prefer referring to him because of the generation gap. Additionally, he feels that the institute doesn’t allow students to explore the courses and subjects of their choice.

“There is some sort of detachment between students and professors, where the professors do not care about what students are feeling and are only interested in what they are scoring. Our faculty should understand that most of the students that come here are for the brand image of the college and not for engineering. For most students, the college is a platform to explore and then decide what they want to do in their lives,” he says.

He further adds, “For instance, they are many students who enrol in chemical engineering but develop interest in computer science. So there is no provision for a student to pursue CS with the course. And, certain companies are open to only CS students. There are restrictions imposed on such opportunities. Many professors are not supportive of students trying different subjects. Getting more freedom to explore what we want, and including that in our degree would be very helpful.”

He adds that making the curriculum hands-on might also lead to more pressure for those who don’t want to pursue engineering because in that case, students will be expected to visit industries. Students also try to stress on the importance of professors teaching students the financial aspects of engineering, so that it helps them professionally afterwards.

“There are many students who are not able to handle the theoretical pressure in our curriculum, especially the freshers. By the end of third year, we get used to giving endless projects, assignments and exams, but freshers will feel less stressed if there is a balance between practical and theoretical assignments. Lesser theoretical pressure will also help us improving grades,” says the 21-year-old.