A 2015 research cited by the agriculture ministry showed that about 730,000 dogs enter the capital. 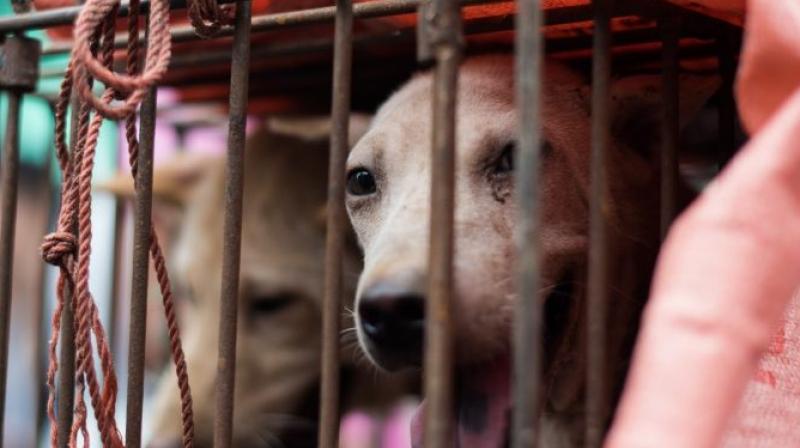 Animal rights groups applauded Indonesia’s decision while calling for an end to trading in meat derived from pets (Photo: AFP)

Jakarta: Indonesia is preparing a regulation to ban the trade of meat derived from pets and exotic animals, aiming to promote animal welfare and rein in disease, an official said on Tuesday, a decision cheered by animal rights campaigners.

People in some parts of the Southeast Asian nation are known to consume dog meat and the government faces pressure from animal rights groups to tackle the issue.

“(Dog meat) is not food, according to our food law,” Syamsu Ma’arif, director of veterinary public health at the agriculture ministry, told Reuters, adding that the ministry was still gathering material to back the planned regulation.

He gave no timeline for it to be issued or when it would take effect.

There is no data on how much dog meat is consumed in Indonesia, but 2015 research cited by the agriculture ministry showed that about 730,000 dogs enter the capital, Jakarta, from West Java each year for consumption.

Animal rights groups applauded Indonesia’s decision while calling for an end to trading in meat derived from pets.

“Customs evolve and the nationwide movement calling for an end to these trades is proof that Indonesia is ready to banish the dog meat trade to the history books,” said Lola Webber, coordinator of the Dog Meat-Free Indonesia coalition.

“This latest announcement will be celebrated globally,” added Webber, whose coalition recently warned against exposure to the rabies virus from eating dog and cat meat.

Indonesia’s pledge could have a cascade effect across Asia, the Humane Society International said, if it spurs action in countries where dog meat is also consumed, such as China, Korea and Vietnam.

“Pressure from the West does get acknowledged, but an Indonesian ban could be a far more powerful driver for change,” said the society’s director, Wendy Higgins.