A pie that won 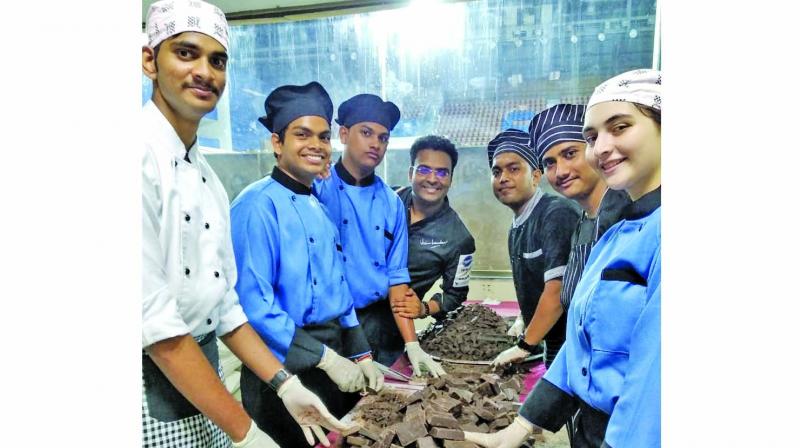 As they say,  proof is in eating a pudding, in this case, it is in eating a pie. For the last 18 months, Chef Varun Inamdar has been indulging in an exploit that is every chocolate lover’s dream. With a synergy of eight executive chefs, 25 chefs de partie and 10 students from the Goa University, Father Agnel and Foody Breaks studio, chef Varun created a humongous chocolate mud-pie that will compete to clinch the Guinness World Record. “The title will be announced in the coming 12 weeks   as per the norm” informs Varun.

Weighing a massive 1,346 kgs with a diameter measuring six-feet, the decadent mud-pie easily swept past the golden mark of one tonne. But it is a challenge only welcomed by the valiant, “Demoulding it could be a nightmare. Even thinking about it gives me butterflies in my stomach,” recalls the chocolatier.

While the room brimmed with culinary experts from Goa such as Chef Prasad Paul, Chef Sunit Sharma, Chef Kunal Arolkar and Chef Kapil Muchandi,  creating the mud-pie itself wasn’t as agonizing as finding the right apparatus for the same,  “It started with getting the perfect mould and the oven fabricated. I designed a specially fabricated vessel and oven along with experts in the field from Udwada after several rounds of trials and errors over the last 18 months,” says Varun. The team created an oven that ran 12 feet deep and had an eight feet diameter apparatus. Once that was readied, the team was all set to create their magnum opus, says Varun, “To begin with, a short crust tart was created from a mixture of eggs, flour, sugar, butter and biscuits. 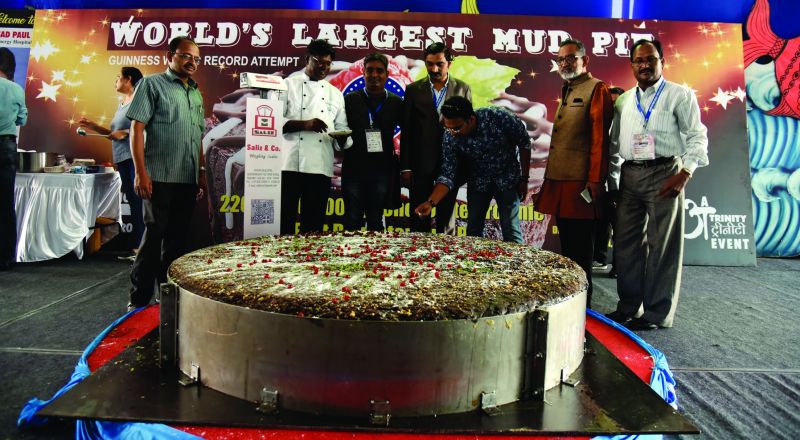 Getting the thickness right could be a daunting task. Baking releases steam that could puff the tart base. Hence, another internal mould was designed to create weight for blind baking. Also, immediate cooling could only be done using dry ice, or the residual heatcould make the pie darker.”

The whole task took the team a good eight hours to finish, while keeping in mind the quality and flavour of the International Standards.

Ask Varun what sprung this idea in his head and he takes us back to his childhood, where he was first initiated to the eccentric universe of world records, “Guinness Book of World Records is the first book my father ever gifted me when I was a child. The fascination of reading others’ records, their achievements, and the hard work that the achievers have put into creating records has been phenomenal. That little inspiration has somewhere been in my heart almost forever. When Trinity Group chaired by Joseph Dias came on board, I was more than happy.”

But Varun’s tryst with chocolate doesn’t end here. The chef is also the official Ambassador of Ecuadorian Cocoa in India and represents the country at various global forums. Fondly known as ‘The Prince of Chocolates’ in his circles, the chef has previously also created India’s first six feet tall, life-size edible chocolate mannequin and a chocolate Ganesha statue on television, “This time I purely wanted to take it to another level in terms of look, grandeur, size, magnanimity and taste. Chocolate mud pie fit the criteria perfectly,” boasts Varun.

All said and done, but the question that loomed at large in everyone’s mind was the imminent wastage that would happen after the contest was over, “We distributed a large amount of the pie to various charities around Goa through the Food Bank for the Poor, Sangolda. We made sure we didn’t waste anything,” he assures.