The many-hued sculptures are dipping the city in colours for the month on March, aiming to spread awareness on conservation of Asian elephants. 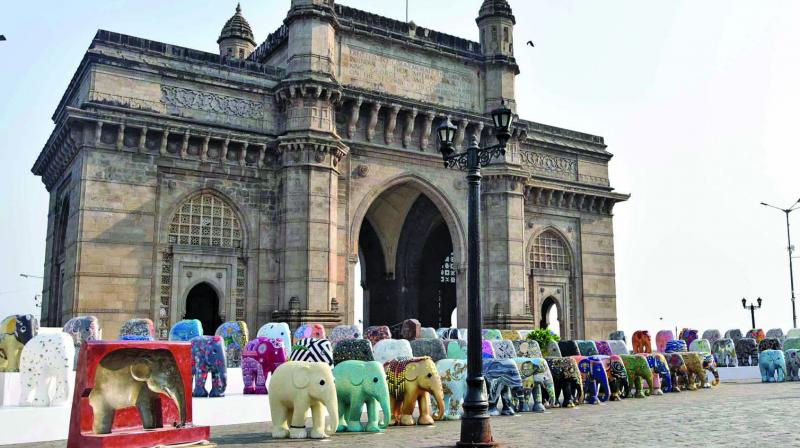 The exhibiton at Gateway of India.

When you take a walk down the Worli promenade for the next few days, soaking in the sunset, be prepared to be accosted by colourful elephant sculptures pitched across your way.

These intricately designed sculptures are part of the Elephant Parade, a project by non-profit organisation the Elephant Family. After completing 24 successful editions across the globe, the parade has brought the elephant party to the city.

For the past many years, the NGO has tirelessly been working on spreading awareness about endangered Asian elephants, whose numbers have fallen by 90 per cent in the last 100 years and on the various elephant corridors in India.

Inaugurated by chief minister Devendra Fadnavis, the first edition of Elephant Parade has 101 elephant sculptures peppered across the city, with artwork done by fine artists, fashion designers and folk artists. And while the parade opened at the iconic Gateway of India, the herd, moving forward, will be found all across the city all through March.

The idea is to talk about awareness for elephant conservation. “The art here is just a medium to talk about the decreasing population,” reveals curator Farah Siddiqui, who adds that she didn’t want to fall into the trap of working with just fine artists, while commissioning the pieces. “My co-curator Aqdas and I wanted to go beyond the obvious. It took us a year to bring the fashion designers and folk artists on board too.”

With 30 fine artists, 20 fashion designers and around seven folk artists on board, the elephants depict the very rich culture and tradition of India. “There is Warli art, Patachitra folk art from Odisha, Bhil art, Gond art, Pichwai folk art and some from Bhopal too,” a proud Farah lists.

“Each artist brings with them something unique, very different language and interpretation of the subject,” she adds. Quite like how artist Dhruvi Acharya, using her signature speech bubble style, has painted the elephant in her style, giving the message that even animals need a voice. Artist and designer L. N. Tallur has used the impression of elephants on a cement base. For art lovers, there is unique craftsmanship at play. Designer Rohit Bal has used the traditional thikri, a mirror inlay work from the palaces of Rajasthan, on the elephants.

These pieces are also set to be auctioned off, with the proceeds going towards saving 101 elephant corridors across India and the Asian elephants. While the curator beams over the overwhelming response, she proudly points towards the wealth of talent in India. “ Indian artists have a very special quality about the artwork they do, whether they’re a fashion designer or craftsmen. And that is what makes it different from the rest of the parades,” smiles Farah.

As far as the art scene in Mumbai goes, the curator is proud about the fact that while it thrives, it still manages to be subtle. “People are being more appreciative of art and culture in public spaces now. This is because it has been lacking form the city. This is the first time India has witnessed public art project on this scale,” she signs off.