Parineeti Chopra appeals to all to be aware of health, hygiene and environment during ‘Behtar India’ campaign. 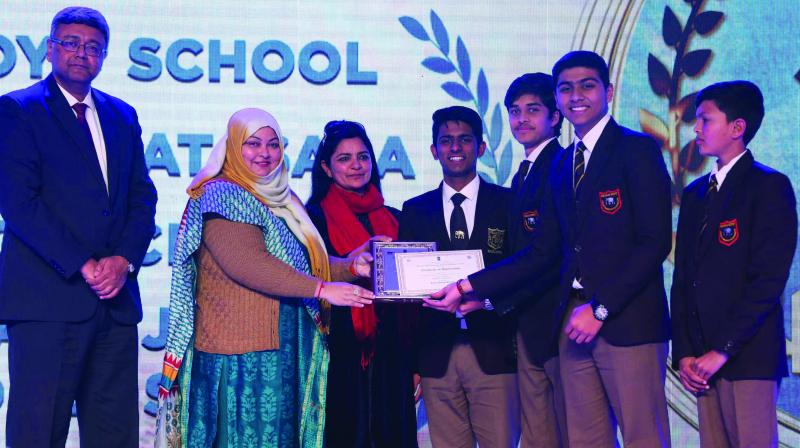 A still from the event.

We eat a chocolate and throw the wrapper wherever we wish, buy vegetables and almost always demand for a plastic carry bag, and all of this we do right in our consciousness. But then why are we teaching our next-gen to be morally dignified? Where is our morality when it comes to behave responsibly? Lack of awareness and lack of initiatives may be a major cause to it. Rectifying which recently the finale of the Behtar India campaign was hosted in the capital recently. The event took place at Taj Palace, New Delhi and was attended by actor Parineeti Chopra. The campaign braced the community to step forward and help itself in achieving better health, hygiene and environment standards. This year-long campaign focused on three main pillars– health, hygiene and environment (recycling).

Sharing her thoughts, campaign ambassador and actor Parineeti Chopra said, “I am an ocean lover and scuba diver. I spend a lot of time underwater and can't explain the kind of visible changes that can be seen in oceans because of plastic.”

According to the Namaste England actress, a biodegradable alternative should be created for plastic. She shares, “We take one plastic bottle and throw it away and we don’t think about it and then that garbage goes somewhere… Unfortunately, it’s filling up our oceans. I come from Mumbai. We face floods every year because sanitation system gets severely affected by the plastic blockage.”

“Boond boond se sagar banta hai (every drop makes an ocean). Everyone should put some efforts to make our Earth a better place to live in. Each voice is important. I try my best to make sure I don’t use anything that is harmful for the environment. Even if I see anyone in public place throwing garbage here and there, I scold them,” added Parineeti.

The initiative was a contest for schools and students, a CSR and an employee engagement window for companies, social service for individuals, an amplification tool for the municipal corporations and for the under-privileged children, it is an opportunity to receive free health benefits.

More than 900 schools along with 11,00,000 students in over 200 cities participated in this campaign and nine companies had adopted this initiative as corporate social responsibility (CSR) endeavour. People from across India recycled 800 thousand kilos of waste, which amounts to saving 2 million litres of water, 13,667 trees and 7235 barrels of oil. The campaign also enabled 24,118 under-privileged children to get dengue protection kits. The campaign celebrated this extraordinary impact during grand finale where the young champions were awarded for their diligence and mindfulness for the environment.

Parineeti said, “I have been a part of the second season of the campaign from the beginning and it is important to spread the message of better health, hygiene and the importance of recycling within communities to make the world a better place to live in. It is a matter of great responsibility for me to take up this initiative and affect social change. The campaign supports the community to step forward and help itself in achieving better health, hygiene and environment standards.”

The campaign supports the community to step forward and help itself in achieving better health, hygiene and environment standards and the same believes the actor.

Acknowledging the efforts, Anoop Pabby, MD & CEO, DHFL Pramerica Life Insurance, who has been behind the initiative, said, “This season has been a huge success due to the contribution and the efforts of people involved in this campaign from different walks of life. Over the course of our four editions, we are overwhelmed with the response that we have received from the schools and students from across India. This initiative to make India a better country by focusing on the three main aspects - Health, Hygiene, and Environment with Recycling as its central theme has managed to get 8,07,452 KGS of waste recycled, therefore creating a colossal impact.”

‘Behtar India’ is a social innovation that rallies to get different segments of the society together to work towards making their cities cleaner, greener and healthier. The unique format not only supplements the government's efforts to provide promotive as well as preventive healthcare to the community, but also ensures quality curative healthcare and behavior change.