Chu Chu, which means "plastic" in Burmese, started in 2013 with just two workers. 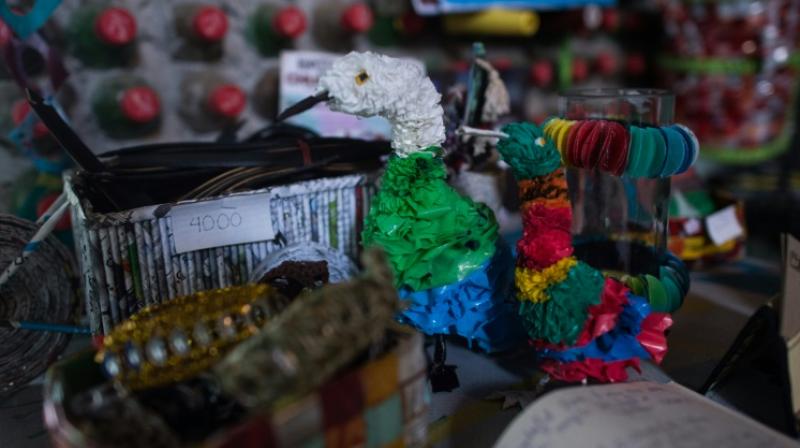 Coffee sacks are woven into baskets and old tyres are refashioned as belts. (Photo: AFP)

Dala, Myanmar: With creative flair the Myanmar-based social enterprise "Chu Chu" lets little go to waste as its staff turn discarded clothes and rubbish into handy accessories that get snapped up by tourists.

Coffee sacks are woven into baskets and old tyres are refashioned as belts -- just some of the 60 products on offer at the organisation's shop in Dala, a short ferry ride from the bustling downtown of commercial hub Yangon.

"We're trying to change the way of thinking that recycled things are old and dirty," explains Canadian volunteer and product developer Debra Martyn.

"We try to make things that are good quality, well constructed, nicely designed and beautiful -- and can be considered useful."

Myanmar has seen a huge spurt in development over the last few years after emerging from half a century of junta rule in 2011.

But the increase in the availability of consumer goods has also caused waste levels to skyrocket, clogging city streets, fields and alleyways.

Chu Chu, which means "plastic" in Burmese, started in 2013 with just two workers.

Now it employs 45 local women and their products sell at souvenir shops in Yangon and across the country.

For the moment, most customers are foreign tourists as Myanmar is still a long way from embracing recycling or recycled products, says managing director Wendy Neampui.

"They just don't understand that throwing plastics away is disastrous," the 66-year-old says.

Even the shop itself is made from reused waste.

Plastic bottles cemented together form the walls and a roof made from old tyres provides insulation and protection during the punishing seasonal changes.

The team suffers no shortage of raw materials.

Just five minutes away lies the town's eyesore of a garbage dump, where piles of putrid rubbish spread over a vast expanse of land roughly equivalent to two football pitches.