'You look so beautiful!': Indonesians celebrate the dead in ancient ritual

The scene is part of an ancient Torajan ritual known as “Ma‘nene”, in which clans visit the tombs of deceased family members. 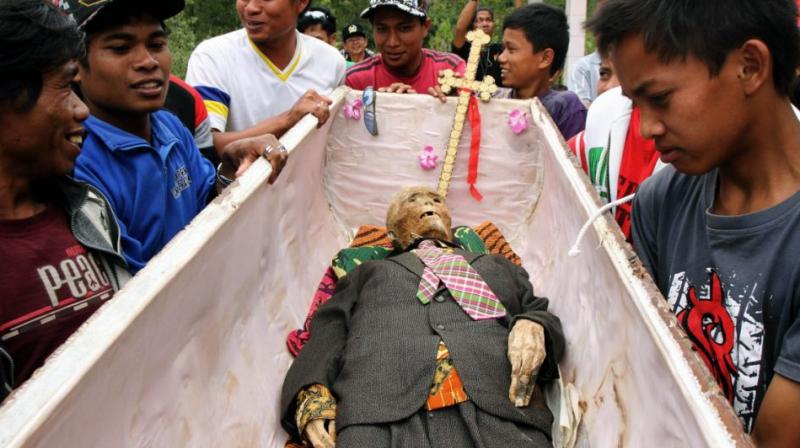 The scene is part of an ancient Torajan ritual known as “Ma‘nene”, in which clans visit the tombs of deceased family members. (Photo: AP)

Yosefina Tumanan, a resident of the remote Toraja region of Indonesia’s island of Sulawesi, was thrilled to see her sister-in-law.

“You look so beautiful!” Tumanan told the skeletal remains of her relative who has been dead for six years.

The scene is part of an ancient Torajan ritual known as “Ma‘nene”, in which clans visit the tombs of deceased family members, clean their remains and replenish the coffins with personal belongings.

“Even though she’s not here physically, we still have a connection,” Tumanan told Reuters as several families gathered at Loko‘mata, a massive boulder in a misty, rice-terraced valley that houses the remains of dozens of people.

“It’s a chance for the whole family to visit and express our love,” she said, adding that the ritual was like a family reunion every few years.

The people of Tana Toraja, or “the land of Toraja”, are mostly Christian, but adhere to old traditions whose roots trace back to animistic beliefs.

This is common in Indonesia, a predominantly Muslim country of 250 million people that is also home to minority groups which espouse Hinduism, Buddhism, and traditional beliefs.

Unlike some other cultures, death is barely a parting for those in Toraja.

The deceased are mummified and housed in ornate, colourful coffins and spend several months or even years in their own homes before receiving a funeral and burial.

Relatives talk to the deceased, offer them food and drink, and involve them in family gatherings, as if they are still alive.

Once sufficient family members can attend and money is available to pay for sacrificial buffaloes and pigs, a funeral ceremony, known as ‘Rambu Solo’, is held, with the whole village usually invited to a feast celebrating communal ties.

Family members shed tears for their dead as the coffin is carried in a chaotic funeral procession to the burial site.

The coffins - painted in bright reds and ochres - are stuffed with clothes and personal effects and placed in narrow tombs carved into monolithic rocks that pepper the mountainous region.

The boulders can be as high as a three-storey building and each tomb can take between three to six months to carve.

Keeping the tradition alive for future generations is an important responsibility, said Renolt Patrian, a 21-year-old studying to be a mining engineer.

“When I have a job and earn money, I will not give up the tradition,” he said after visiting his great-grandmother who died last month in the family home.