Healing touch of a veterinarian

Dr Hanumant Ghanwat is a skilled veterinary surgeon, who has done the most number of surgeries worldwide. 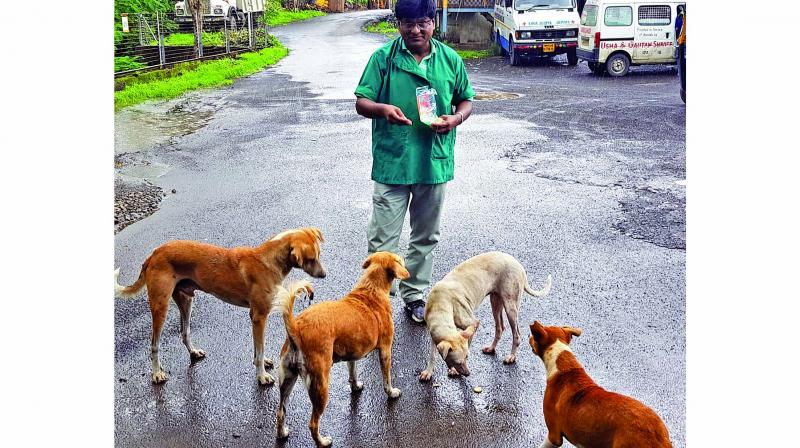 Fastest finger first may be a concept popularised by Kaun Banega Crorepati but it is also the best way to describe Dr Hanumant Ghanwat, the veterinary surgeon from Mumbai, who can do a castration (neutering) under two minutes and a more complicated spaying of females under four minutes. It’s then no wonder that he does an average of 50 surgeries a day, around 1,300 a month. “This way, there are smaller incisions, minimal bleeding and less suturing,” he explains. But he is so shy you’ll find no mention of him on Google.

How did a farmer’s boy from the small village of Morochi in Baramati district end up being so successful? Well, he grew up among cattle, poultry and goats. And whenever they were ill, he would watch the vets from the local government hospital in action and often assist them when he could. Thus, the idea of looking after suffering animals was born.

After obtaining a distinction in his Class XII exams, he joined the Government Veterinary College in Mumbai, from where he did his graduation and post-graduation in surgery. “I was inspired by legendary surgeons like Dr Mantri and Dr Kudle, who encouraged me to operate on my own. When I couldn’t decide what to specialise in, they urged me to become a surgeon, as they said I had god-gifted hands.” With a mortality rate of only 25 animals, the good doctor boasts of a 99.99 per cent success rate after operating on 1,96,778 animals to date.

He considers every surgery a challenge. He has had complicated cases like removing a single stone weighing half a kilo to taking out mammoth mammary tumours up to three kilos. Perhaps the most taxing operation was on a stray dog involved in a serious accident. “Its intestines were torn to bits and it took me more than 45 minutes to sew up the pieces. I’m glad it survived.”

It’s not difficult to guess that Dr Ghanwat’s heart beats for the strays. He charges the bare minimum at the various shelters he goes to, but admits he takes the normal fees at his private clinic for pets. But his besotted clients have flown him to Thiruvananthapuram, Chennai, Pune and Delhi as they refuse to have anyone, but him touch their beloved pets.

He is one of the founder members of Welfare of Stray Dogs — perhaps Mumbai’s oldest rescue homes — Ahimsa and In Defence of Animals. At any given time, these havens for injured, homeless and distressed animals, house around 1,500 of them. Funds are always low, apathy and cruelty rampant, but they soldier on.

What next? With a tally of two lakh surgeries just around the corner, the 50-year-old doctor – with all his documents ready – is waiting to enter the Guinness Book of World Records as the one who has done the most number of surgeries worldwide since he took up the scalpel 24 momentous years ago.