Let’s listen to the story of a doll that was born from cheru (mud), thus named Chekutty. 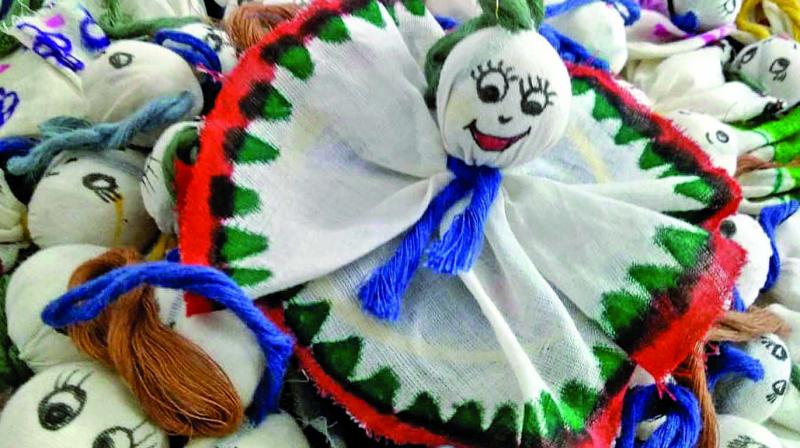 The most surprising part about these cute little Chekuttys is tha they not only represent the revival of the handloom industry in Kerala, but also forms the mascot of resurrection of an entire stat that was ravaged by floods.

Rising from the ashes is probably one of the strongest terms used to define the willpower of a person to bounce back from the biggest failure that he/she had to encounter. When it is about a group of people trying to come out of a crisis, it is hailed as a group effort.

However, it is beyond words to describe the impact when an entire state sets out on a journey towards resilience. Where every sector was suffering very badly due to the floods, the textile industry also incurred one of its major losses in history. And as the journey towards rebuilding began, the fashion industry, too, came forward to help revive it from the crisis.

It would be even more astonishing to know that a doll made of soiled clothes has become the face of hope, survival and revival for the people of Kerala who are doing everything possible to bring back the lost glory of the state, majority of which got washed away in the devastating flood that hit the state in August. Let’s listen to the story of a doll that was born from cheru (mud), thus named Chekutty

It started as an initiative to revive the iconic Chendamangalam handloom cluster in Ernakulam, comprising five societies and 60 weavers, which was completely destroyed in the floods leaving the weavers jobless. However, according to Lakshmi Menon, co-founder of the initiative, Chekutty has become the symbol of the stories of each and everyone who has been affected by the floods, directly or indirectly. She, along with her friend and co-founder of Chekutty Gopinath Parayil, who was directly involved in the rescue mission at Chendamangalam and witnessed the severity of the situation, decided to come up with a solution that would at least provide a bit of comfort to the weavers. The weavers had been planning to burn the `20-crore-worth handloom sarees and other apparels that were completely destroyed, as the looms and the entire stock of the village were submersed making it just a waste pile of clothes.

“I was shocked to know the situation of Chendamangalam and for both Gopi and myself, burning the fruits of labour of such talented artisans felt like a crime, as we exactly   knew the amount of dedication put into making these products. Gopi, too, having been closely associated with textile tourism, was not convinced by the fact that the fate of these the damaged stock was to burn them. Even if the environmental impact could be overlooked, (which we could not do at any means) the extent of loss that the already-dying handloom industry would incur could not be left unattended. The next thought was how to make these sarees useful in one or the other way. Some were made suitable for sale after dry cleaning and treating with chlorine. However, majority of them was completely destroyed and after a lot of brainstorming, we thought of making dolls out of these soiled clothes. Moreover, there is not an iota of charity in this initiative, which we genuinely think is not a sustainable way of finding a solution. It is simply making another product from the clothes already made by the weavers; selling the dolls and giving them back the money that is their right.”

As it was not easy for the weavers alone to make Chekuttys, the initiative was announced by Lakshmi and Gopi through their Facebook accounts. The dolls have gained popularity ever since, so much so that now, there are more than 250 volunteers working for the cause by organising workshops in and outside the country.

A contented Lakshmi says, “The weavers have received enough and more funds to make their looms working. With help pouring in from ever direction, Chendamangalam is back on track and we are happy that we could be a part of it. However, we are still getting orders for Chekuttys. Therefore, we have now decided to take it to the next level by giving it an enterprise model and have decided to provide a part of the income generated from selling Chekuttys to the underprivileged. We are working in association with the Institute of Palliative Medicine, Kozhikode, and the inmates will receive `5 for each Chekutty they make.”

Elaborating more about the wave of change that Chekutty has brought Lakshmi says that she has received many messages from people sayin that making the Chekutty dolls have become a solution for their loneliness and depression.

“I came to know that famous psychiatris Dr. C.J. John is quoting Chekutty as an example to motivate childre from committing suicides. He is convincing these kids by narrating the story of a doll that is made from a dirty cloth, which is imperfect, has scars and stains on it, yet is very adorable and thus gives the message that things need not be always perfect to make  change and that there are small solutions for big problems,” she says.

The most surprising part about these cute little Chekuttys is tha they not only represent the revival of the handloom industry in Kerala, but also forms the mascot of resurrection of an entire stat that was ravaged by floods. It represents each and every person of th state, who is trying hard to build a new life and has succeeded in their efforts.