Though India is yet to develop a taste for artisanal cheese, these cheesemakers are making inroads into the space with their top quality produce. 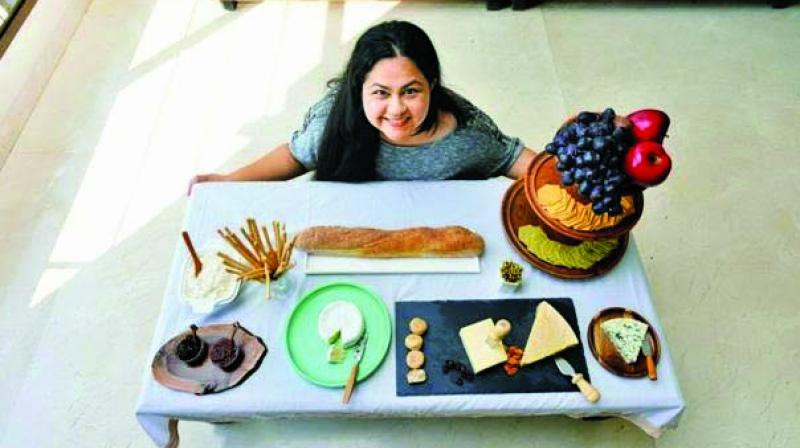 The unaged, soft and crumbly Paneer or cottage cheese is one of the most popular cheeses indigenous to the Indian subcontinent. It has traditionally featured as a protein in most North Indian curries and vegetables and is a time-honoured staple in India. Its variant, Chhena has also been the mainstay of many Indian sweetmeats. However, in the last few years, a few artisanal cheesemakers from the city have been experimenting and getting inspired from the authentic varieties of French and European cheeses, and producing top quality produce even in the face of Mumbai’s sultry weather. 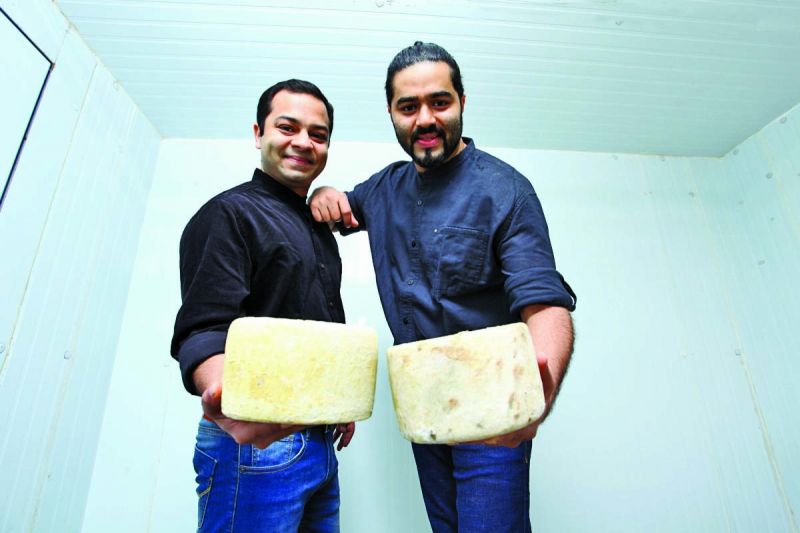 The Spotted Cow Fromagerie, founded by brothers Prateeksh and Agnay Mehra, have been creating frighteningly authentic Northern French Cheese offerings — Brie and Camembert and the Classic Italian Robiola and calling it Bombrie, Camembay and Rombay to give it the Mumbai birthmark. Surprisingly, the duo embarked on their cheesy journey when their search for good quality cheese to pair their micro-brewed beer, was met with mediocre responses, says Prateeksh. With the help of an aunt in the United States, (which was going through an artisanal cheese making boom at the time) the duo managed to get their hands on imported rennets and cultures to make their versions of the Brie and Camembert in Mumbai. But the Mehra brothers’ affirmation in cheese making was realised only at the 2014 BBC Good Food Show exhibition in Mumbai.  Narrates Prateeksh, “We got a phenomenal response there. It was then that we realised about the huge gap in the supply of the cheeses we were making.” 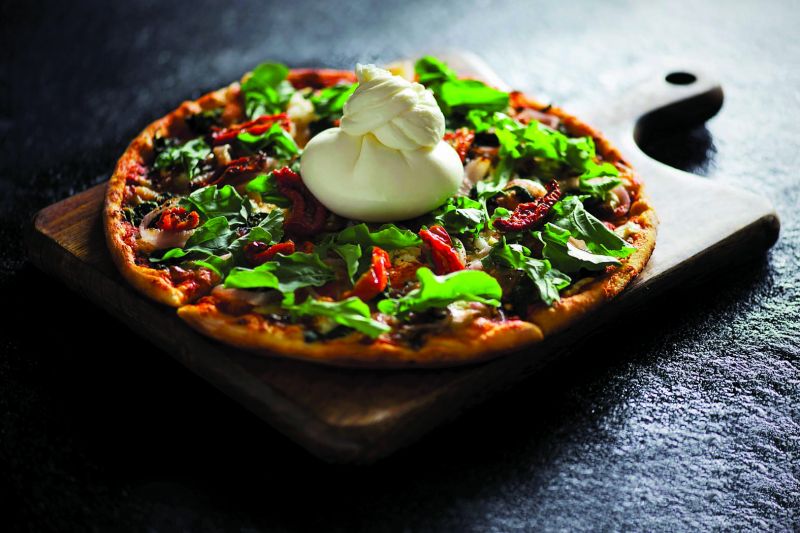 Today, the brothers supply huge volumes of cheese, almost 250 kgs a month, with the business quadrupling every six months in terms of both clients and scale of production. “Last year, we introduced flavours that were more palatable to the Indian consumer and could be consumed easily—something that could be put on toast or be given to the children and obtain the nutrition that cheese is supposed to lend,” narrates Prateeksh. “All this and more, without pumping yourselves with sodium, unwanted fats, emulsifiers and preservatives.” The Spotted Cow cheese is also available at many outlets such as Nature’s Basket and Food Hall across the city. 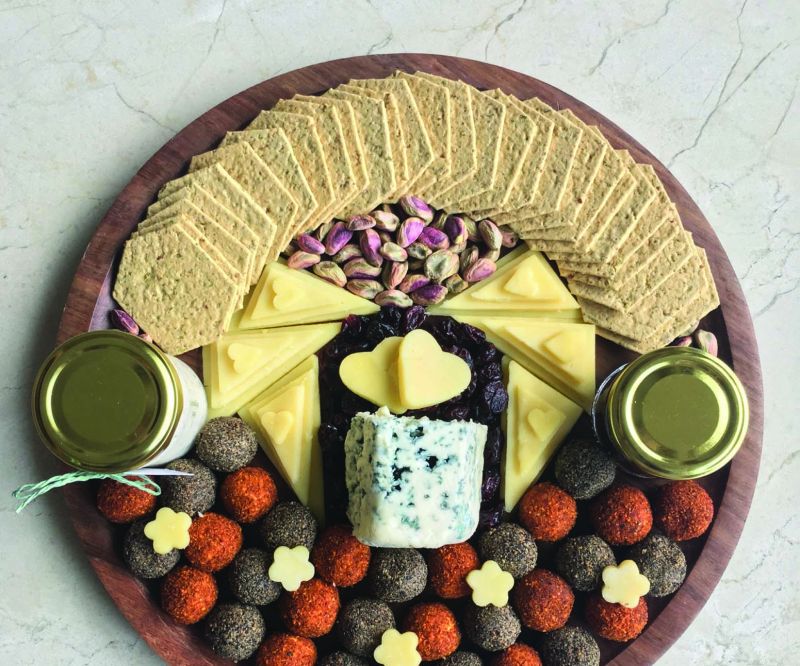 A cheese platter by Mansi.

Mausam started her creamery in 2015 and has been supplying to major restaurant chains in the city ever since. If you’ve sliced open a dramatic looking wobbly burrata in any city restaurant, it’s probably coming out from the Eleftheria creamery.

It took Mausam over two years to understand the nuances of cheese making while working a corporate job, “I started making cheese as a hobby over the weekends and then it turned into an obsession. I had a refrigerator in my room that I converted into a cheese cave and I used to age cheeses in my room and all of that,” she explains.

While the Burrata is their most famous product, the Eleftheria cheesemakers also have on offer “a farmer’s style spread cheese, Fromage Blanc, and the recently introduced halloumi.” “We’ve also dabbled in making small quantities of this aged cheese called Belper Knolle which is essentially an aged cheese ball, made traditionally in the Swiss Alps. It’s a cheese ball, which we infuse, with crushed garlic and crushed black pepper and then we age it for two-three months, depending on how we want our product to be,” shares Mausam.

The Cheese Collective is yet another creamery making fresh cheeses and curating cheese from cheesemakers across India. They also conduct cheese appreciation and pairing workshops, making customised cheese platters and gift baskets and setting up cheese tables for events. “Think copious amounts of cheese and ideas and items that go with it,” avers Mansi Jasani, the founder.  The Cheese Collective, which began in 2014, sells a variety of Goat cheese – made with everything from mixed herbs to honey.

For Mansi, cheesemaking is an obsession that's hard to shake off. She says, "Curating cheese is just like curating art and artifacts for a museum. Each item is carefully selected and then taken care of for future enjoyment. I get a chance to share my cheese experiences with people, another highlight of my work week,” she narrates excitedly.

Dhvani Desai is another cheesemaker from the city, which completes the artisanal cheese circle in Mumbai. She runs Casa Del Cheese that home delivers their fresh cheeses on order. Coming out from the Casa Del are organic and vegetarian cheeses including chevre, snowflake and buffalo milk feta, which comes with brine that increases its shelf life to six months.

Mumbai's cheese revolution is way into its adolescence and is at the cusp of a revolution. But the market is yet to ripen, cold chain processes need to be fixed and the Indian consumer must consciously want to eat good quality cheese and break away from the status quo, cites Prateeksh, "Cheesemakers here are focusing on moving volumes, they keep it cheap. As a business model it’s great, but since India is the largest producer and consumer of milk, we have so many varieties of cows here, so why can’t we make good cheese?” he rues.

Mausam corroborates, “In India a lot of milk does not come from dairies that are certified. They don't know how to take care of their animals well, there’s lack of hygiene. Cheesemaking milk has to be of top quality,  but by the time it reaches the consumer, the product its unfit for making cheese. So the cold chain is not in place in India. But itis slowly changing,” she assures