Ghee: Must-have for a healthy diet

Ayurveda has advocated the use of ghee for centuries and for good reason. Read more to find out about its host of health benefits. 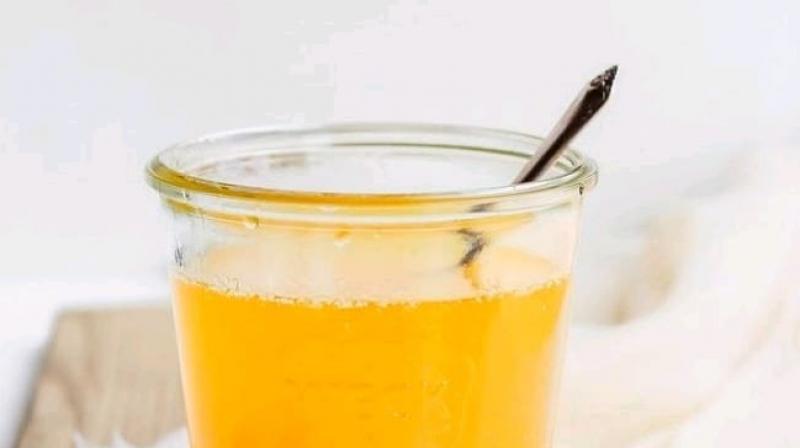 The best ghee is that obtained from the milk of grass-fed cows, devoid of any pesticide and pollution. (Photo: Instagram)

Nothing is more traditionally Indian than some ghee. It is widely used in every aspect of Indian cooking, for making dals, rice items, rotis and even sweets. Ghee is used as a substitute for oil as a cooking medium as it imparts a richer taste and flavour to the dishes.

A few years ago, ghee was consumed widely and without guilt. When people started getting health conscious, they started cutting out all forms of fat from their diet, including ghee. According to the Vedas, it is one of the most essential of all foods. Ayurveda places it right at the top of the must-have foods list. The popularity of this magic, golden liquid has since picked up, with more and more people recognising its benefits, reported The Quint.

The best ghee is that obtained from the milk of grass-fed cows, devoid of any pesticide and pollution. It has been followed by generations, not just because it has been mentioned in the scriptures, but because it is a way to a healthy lifestyle.

Ghee and its health benefits

Ghee, also known as clarified butter, originated in ancient India. It’s a time-consuming process to make it. White, unsalted butter is heated until the clear, golden liquid separates from it as moisture evaporates. The sugar and proteins sink to the bottom and the clear liquid is strained and stored.

Ghee is called Ghrita in sanskrit and finds various mentions in the Rig Veda as well as the Mahabharata. It is mentioned as a pure and sacred liquid. It is considered as auspicious and also finds uses in religious practices.  Ayurvedic texts have spoken about the health benefits of ghee for the whole body. It acts as building blocks for the tissues (dhatus) and pacifies any imbalances in our bodies (Vata and Pitta doshas).

There are several ways in which you can incorporate ghee in your daily diet. Using ghee instead of oil is a great substitute while making rotis. Use ghee instead of butter to grease your bread. This reduces the glyacaemic index of the food. With it offering a host of health benefits, its time to go back in our roots and start regularly incorporating ghee in our diet.