An exhibition that showcases installations from budding artists in a residential complex keeping the earthiness intact. 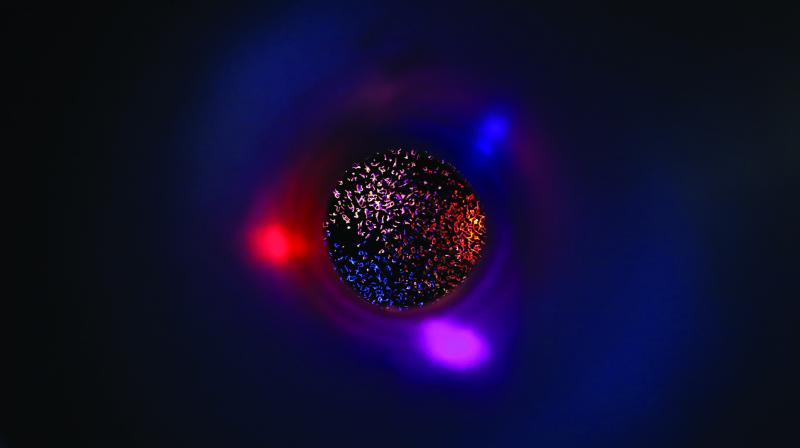 Keeping in mind the earthiness of installation art and the aim of providing a platform for budding artists to showcase their work, an exhibition called Dharti Arts Residency Open Studio is currently being organised by Serendipity Arts Foundation in the capital. The exhibition showcases the works of Farah Viraf Mulla, Khursheed Ahmad, Shazia Salam and Dharmendra Prasad.

The artworks on display comprise of mixed-media installations, sound and performance art. The artworks remain (in)complete, at early stages of a processual, and only find a semblance of resolution it encounters with the audience, the viewer and the visitor.

In a chat with Samira Bose, coordinator, she explains that there is a certain sense of earthiness is prevalent in the exhibition. “Perhaps the reason that there's an earthiness is that all these works are still elemental. if we could even call them rough cuts of ideas that the artists are tinkering with, and that they hope to push further,” she says.

Another peculiar aspect of this exhibition is that it is not happening in an art gallery but it is happening inside a residential building. You read it right - a residential building. On being asked how these artworks are bringing art out of galleries, she responds, “In Delhi, there are many galleries in residential colonies The framework of this residency is such that the artists get to spend a relatively long period of time in these residential colonies and can make work that doesn't have to be "complete" or framed in a sense. They might be in the same spaces, but they're very different models with entirely varied intentions.”

The role of imagination and thinking are key for any artist and art lover. But which of the two is more important? Samira weighs in by saying, “If thinking is being defined in a cerebral sense, these works address many other registers in which we can "imagine" - affective, embodied and experiential. I don't think any is better than the other - it is what it is.”

Farah Mulla, an artist of the exhibition. Her works deal with the human experience of sound in relation to time and space. Her artwork draws attention to sound through modes of perception. She explains, “The fact that sound is know to have physical effects on us but not have any physical materiality of itself, made me  curious of how its immateriality could be visualised or experienced physically.”

The ambience of a place is comprised of many small sounds, near and far, which generally are heard as a composite, not individually. “With sounds constantly competing against each other to be heard within a soundscape, the rising decibel levels have been playing havoc with our biological and environmental systems,” she says. She then explains, “My work tries to bring the viewers attention to the listening experience via multiple modes of perception in order to make sense of our aural experience.”