The developments come after at least six Congress MLAs in Gujarat resigned from the party to join the BJP. 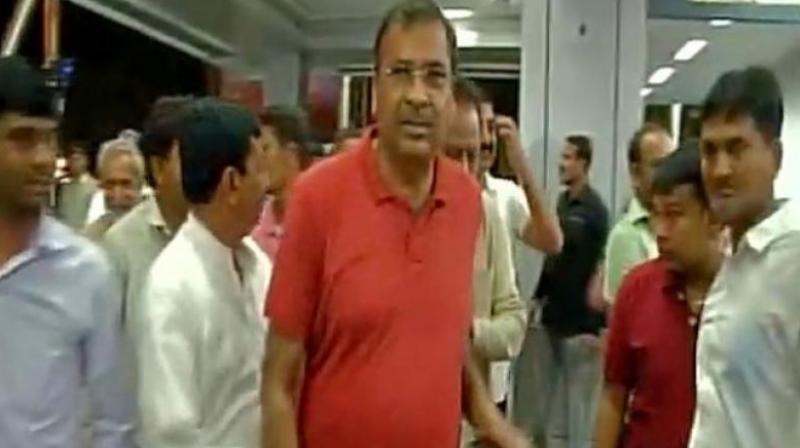 As many as 44 of Congress MLAs left for Bengaluru on late Friday night to ensure they do not succumb to police and political pressure to join BJP. (Photo: ANI | Twitter)

Ahmedabad: In the backdrop of Gujarat Congress MLAs quitting and joining Bharatiya Janata Party (BJP), as many as 44 of the grand old party MLAs left for Bengaluru on late Friday night to ensure they do not succumb to police and political pressure to join the saffron party.

Speaking to the reporters, Congress MLA Shailesh Parmar said, "To ensure that BJP is not successful in its mission, 44 of us Congress MLAs are leaving from Gujarat for Bengaluru. To hide their failure, the saffron party is trying to make sure our MLAs resign by offering money and through police pressure."

Congress MLAs, who reached Bengaluru late on Friday night, said that there is no pressure and that they are not scared of the saffron party.

One of the MLAs said they will be visiting Tirupati.

Earlier on Friday, Congress leader Abhishek Manu Singhvi accused BJP in the state of horse-trading ahead of the Rajya Sabha elections scheduled for August 8.

He said, "Crores of rupees have been spent in horse-trading in Gujarat by BJP. One Congress Gujarat MLA Punabhai Gamit has said he was offered Rs 10 crore by BJP to join hands with them."

Following this, Union Minister and BJP leader Ravi Shankar Prasad laughed off the accusation and said the Congress has become a sinking ship and is not able to hold their own house together.

"Congress has become a sinking ship and the senior leaders, who did not get respect, are now openly saying that they don't want to continue with them. This is the hard fact. The sinking ship is not able to hold itself together," Ravi Shankar Prasad said.

He said Congress has been making baseless allegation against BJP and further called on Congress president Sonia Gandhi to come up and clarify why their party is crumbling down like a deck of cards.

"They have to explain this. The allegations are laughable. They are making it in utter desperation," he said.

The developments come after at least six Congress MLAs in Gujarat resigned from the party to join the BJP.