Amit Shah also asked the state officers to be sensitive towards balanced development of all three regions -- Jammu, Kashmir, and Ladakh. 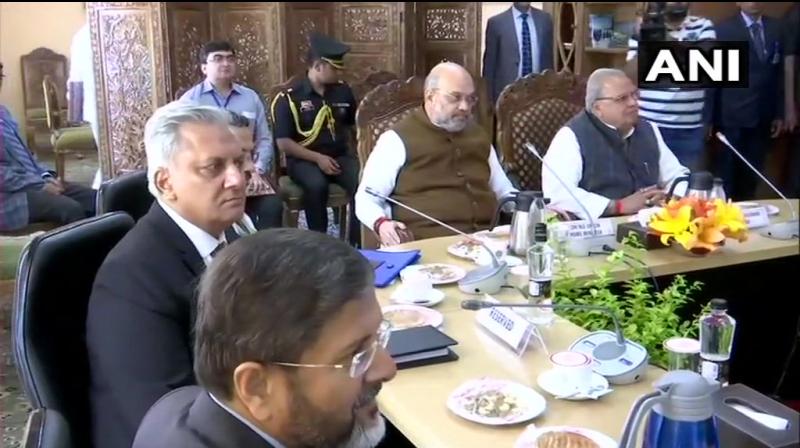 Shah also interacted with a representative group of sarpanches from the state to get an insight into the current state of functioning of Panchayats in the state, according to an official statement. (Photo: ANI)

Srinagar: Lauding the work of Jammu and Kashmir Police in countering terrorism, Union Home Minister Amit Shah on Thursday directed the state government to honour the martyrdom of its slain policemen by naming prominent places after them.

In his first visit to the state after assuming office, the Home Minister held a number of meetings here with officials to assess the security scenario in the state, review preparations for the Amarnath Yatra and ensure good governance in the state.

Shah also interacted with a representative group of sarpanches from the state to get an insight into the current state of functioning of Panchayats in the state, according to an official statement.

During the visit, Shah also visited the home of the slain inspector of Jammu and Kashmir Police Arshad Khan. The Home Minister handed over an appointment letter to Khan's wife for a job in the state government.

The meetings were attended by Governor Satya Pal Malik, Union Home Secretary Rajiv Gauba, all four Advisors to the Governor, the Chief Secretary, and senior officials of the State and Central governments, security agencies and the armed forces.

The review of development programmes focused on improving the lives of the common man. It covered a wide range of issues connected with improving the economic condition of the people of the state, providing them with employment and livelihood opportunities, the benefit of social security schemes, and raising their income.

The issues which figured in the meeting included good governance, accelerating development, strengthening the panchayat and municipal system, fast-tracking the implementation of the Prime Minister Development Package, building first-rate infrastructure, inclusive growth for all communities, balanced regional development with special emphasis on employment generation, and reaching out to the youth, the statement said.

The Union Home Minister's focus was primarily on ensuring that the benefits of growth and development reach the poorest of the poor. He asked the state government to focus on a better and more efficient implementation of development schemes so that corruption and leakages are plugged and the citizens to get the intended benefits.

The meeting also examined the administrative and other arrangements made for ensuring smooth conduct of the Yatra. The security agencies gave a detailed briefing on the security scenario in the state, and the results of the last year's efforts in containing militancy.

"While the improvements in the security scenario were noted and appreciated, there was a detailed discussion on what further improvements could be made for restoring peace normalcy in the state," the statement said.

The state government should ensure that the newly established Panchayati Raj and Urban Local Bodies (ULBs) system takes deep roots and establishes itself as the third tier of the government.

"There should be a drive to ensure that Panchayats and ULBs spend the funds given to them. These funds run into thousands of crores and ensuring their proper utilisation would benefit the people," added the statement.

The Home Minister said that the state government should take steps to ensure that the newly created Anti-Corruption Bureau (ACB) focuses on cases of rampant corruption.

"Similarly, the state should prepare a programme for reaching out to the youths who are highly skilled such as MBBS, engineers and MBAs and do not have gainful employment or livelihood," Shah was quoted, as saying in the statement.

The Home Minister praised the work of the state police in countering terrorism and militancy and directed that the state government should commemorate the martyrdom of its policemen in their hometowns and villages in an appropriate manner each year.

He asked the state officers to fully be sensitive towards a balanced development of all the three regions -- Jammu, Kashmir, and Ladakh.

The Home Minister further said that he would review periodically the performance of the state on multiple fronts.