Breaking away from protocol, Governor Satya Pal Malik, accompanied by his advisors and some top officials, received Shah at airport. 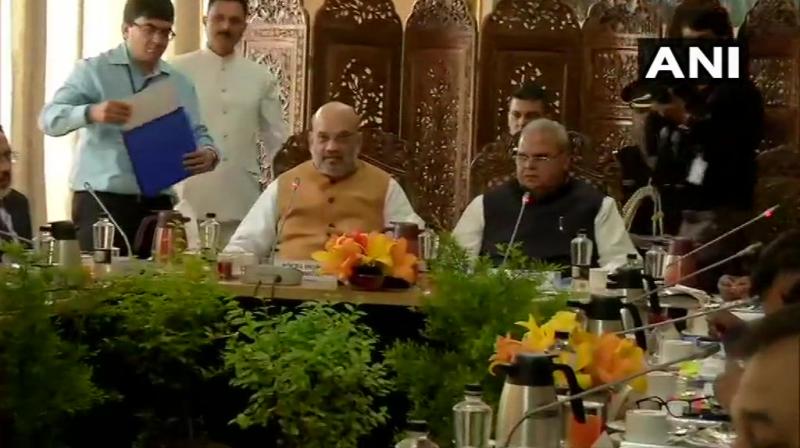 The Home minister was briefed about the overall security situation in the state, especially in the aftermath of the Pulwama terror attack in which 40 CRPF personnel were killed. (Photo: ANI)

Srinagar: Signifying the importance given to Jammu and Kashmir by Prime Minister Narendra Modi's government, Union Home Minister Amit Shah on Wednesday chose the state for his maiden visit after assuming office and reviewed the security situation.

Breaking away from protocol, Governor Satya Pal Malik, accompanied by his advisors and some top officials of the state administration, received Shah at the airport, officials said. Governors in the past have normally only received the prime minister while visiting the state.

Immediately after his arrival here, the Home minister, who is on a two-day visit, chaired a high-level meeting of civil administration officials and top bosses of various security agencies in the state, the officials said.

The Home minister was briefed about the overall security situation in the state, especially in the aftermath of the Pulwama terror attack in which 40 CRPF personnel were killed, the officials said.

The officials also informed Shah about various steps taken to eliminate the top militant leadership, while ensuring that the ultras are not able to carry out Pulwama-like attacks, they said.

Shah was also briefed about the steps taken for ensuring smooth and safe conduct of the annual Amarnath Yatra, which is due to commence on July 1, the officials said. The Home minister is slated to visit the holy cave shrine of Amarnath in south Kashmir Himalayas, they said. He is also scheduled to meet the families of policemen killed in militant attacks in the state.