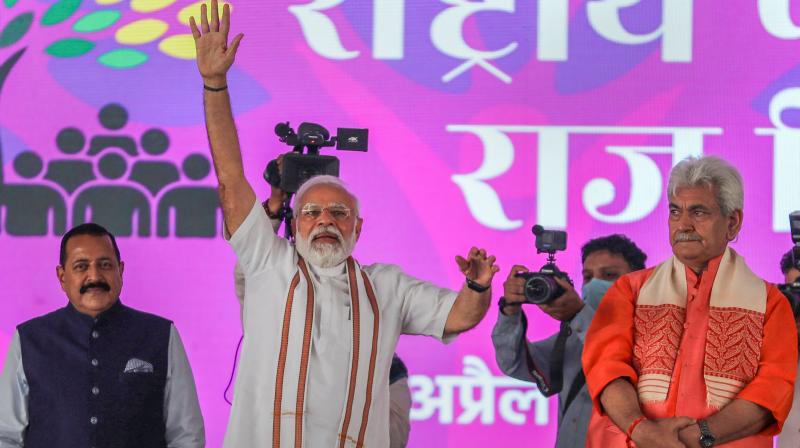 Srinagar: Prime Minister Narendra Modi on Sunday said that democracy and development were reaching grassroots in the Union Territory of Jammu and Kashmir after constitutional reforms, an obvious reference to the abrogation of Article 370.

This was the Prime Minister’s first visit to J&K after the erstwhile state was stripped of its special status and split up in two UTs by the BJP government at the Centre on August 5, 2019.

While seeking to strike a chord with the next generation of J&K, the erstwhile state and especially the Kashmir Valley, which has been through decades of violence, mayhem and political uncertainty, Modi said it would not suffer like their ancestors but see springtime full of life and growth.

“I assure, rather promise that the youth of J&K won’t see hardships and sufferings as their parents and grandparents did,” Modi said. “Today, Rs 20,000 crore worth projects related to connectivity and electricity have been inaugurated. The local youth of this place will get jobs,” he said.

Modi was, on the National Panchayat Raj Day, speaking at a mammoth rally at Palli Gram Panchayat in Samba district close to the border with Pakistan.

Though the day is celebrated across the country, some political watchers saw in the Prime Minister choosing J&K for addressing the people on the occasion, an attempt to showcase his government’s “achievements” in the UT post August 2019 and send a political message that the “historic decision” of ending its special status had set off a major positive political as well as social makeover.

The Prime Minister said that be it democracy or development, J&K was setting a new example. “New dimensions of development have been created in Jammu and Kashmir in the last 2-3 years,” he said adding “It is a symbol of change that this year Panchayati Raj Day is being celebrated in J&K.”

As a series of laws have been introduced in J&K and several existing ones amended and many Central laws made applicable to the UT, the Prime Minister asserted that these had helped empowering every resident particularly women, children and downtrodden sections.

He said, “There were almost 175 laws which were not applicable here. We have implemented those laws in J&K to empower every resident of UT. I feel proud, today after 75 years, Walmiki Samaj people are equal to any other citizen of India. These people suffered a lot.” He added, “These people got freedom after 75 years of India’s independence.”

“Be it electricity, water and LPG connections, construction of toilets under Swachh Bharat Abhiyan, or any other Central scheme, J&K is receiving benefits of all such schemes,” he said. This year, for preservation of lakes and other water bodies of J&K, huge funds were earmarked.

One of the projects inaugurated by the Prime Minister is a 500-KW solar power plant at Palli, which made it the country’s first panchayat to become carbon neutral. Modi while referring to India’s leadership on international environmental and climate change platforms expressed pride that Palli Panchayat had becoming first carbon-neutral panchayat.

He said that the place was not new to him nor was he new to its people. He said that in the past ten days, the  people of Palli had been providing free food to guests who were turning up in the village to attend the rally. “I salute all the villagers of Pali for their commitment.”

As business giants from the United Arab Emirates, Saudi Arabia and Hong Kong have committed themselves to investing in J&K, the Prime Minister said, “I met a Gulf delegation. They are quite enthusiastic about J&K. Post 1947, just Rs 17,000 crore outside investment reached J&K. But in just the past two years, Rs 38,000 crore investment proposals stand cleared for J&K.”

He said that corruption is being crushed by the clean administration which has raised the confidence of investors.