Taking to Twitter, Singh asserted that the neighbouring country should start preparations to handover PoK to India. 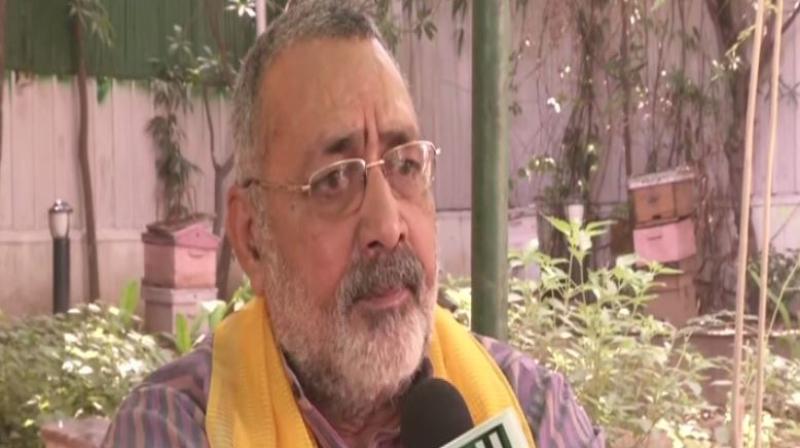 'Rahul Gandhi and Congress are in a strange situation, behave like cheerleaders of Imran Khan,' Giriraj Singh said. (Photo: File)

New Delhi: Amid the Opposition's uproar over US President Donald Trump's remark on Kashmir, Union Minister Giriraj Singh on Wednesday said Rahul Gandhi and the Congress are behaving like "cheerleaders" of Pakistan Prime Minister Imran Khan.

Taking to Twitter, Singh asserted that the neighbouring country should start preparations to handover PoK to India, rather than harping on Kashmir and the possibility of a "referendum."

"Rahul Gandhi and Congress are in a strange situation, behave like cheerleaders of Imran Khan. Imran does not know his worth, he should stop harping on referendum and Kashmir, and start preparing to handover PoK to India. Narendra Modi is in power, not Jawaharlal Nehru," he tweeted in Hindi.

This came after the opposition members raised the issue for the second consecutive day in Parliament and sought a reply from the Prime Minister over Trump's claim that he had sought his mediation over Kashmir.

Commenting on the controversy, Rahul had tweeted on Tuesday, "President Trump says PM Modi asked him to mediate between India & Pakistan on Kashmir! If true, PM Modi has betrayed India's interests & 1972 Shimla Agreement. A weak Foreign Ministry denial won't do. PM must tell the nation what transpired in the meeting between him & @POTUS."

On Monday, Trump, during a meeting with Imran Khan, had claimed that Modi requested him to mediate the long-pending issue. However, India has rejected his claim.

"I would like to categorically assure the House that no such request has been made by Prime Minister Modi," External Affairs Minister S Jaishankar told the Parliament after opposition sought a clarification from the Prime Minister over Trump's claim.