The Governor was speaking at a Doordarshan event in Srinagar with Prakash Javadekar and Jitendra Singh were also present on the occasion. 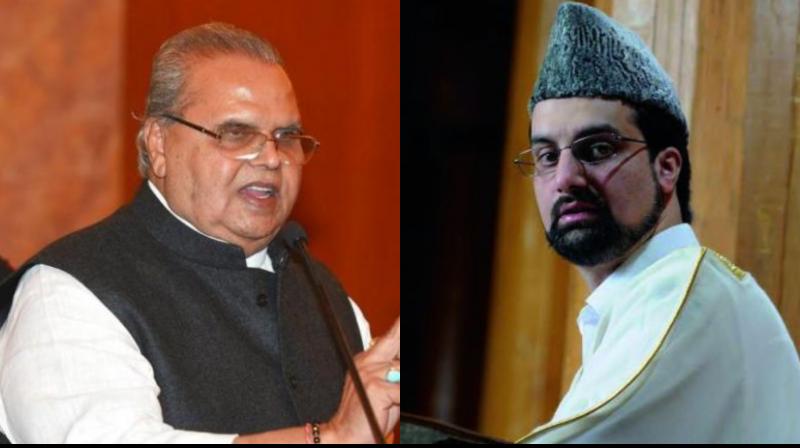 In an interview published on Friday in the Daily Excelsior from Jammu, All Parties Hurriyat Conference Chairman Mirwaiz Umar Farooq had said the Hurriyat leaders were ready for talks with the government. (Photo: PTI | H.U. Naqash)

Srinagar: The situation in Jammu and Kashmir is much improved now and the Hurriyat is ready for talks, Governor Satya Pal Malik has said. The "temperature is lower," the Governor declared at a Doordarshan programme in Srinagar on Saturday, in the presence of Union ministers Prakash Javadekar and Jitendra Singh.

"Things are much better now. You have noticed (the change in) Hurriyat. When Ram Vilas Paswan was standing at their door they didn't open the door. Now they are ready to talk," Malik said.

In an interview published on Friday in the Daily Excelsior from Jammu, All Parties Hurriyat Conference Chairman Mirwaiz Umar Farooq had said the Hurriyat leaders were ready for talks with the government.

Reiterating what he said last month after the BJP’s massive election victory, he said: “With such massive mandate, it is the responsibility of the central government to take forward the political process in the state and initiate all possible measures to put an end to the cycle of violence in the state”.

Mizwaiz Umar Farooq, had also urged India and Pakistan to begin dialogues that have been stalled since the terror attack in Jammu and Kashmir's Uri.