Slamming opposition parties, PM Modi said they were running after the prime minister's chair, ignoring the poor, youth and farmers. 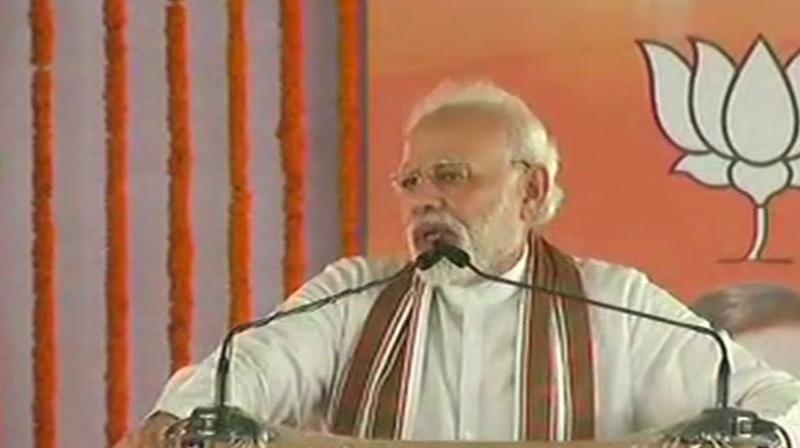 PM Modi used a Hindi expression that translates to more the parties, more the marshy land in which the 'lotus' blooms. (Photo: ANI | Twitter)

Shahjahanpur: Prime Minister Narendra Modi on Saturday took a dig at Rahul Gandhi over the "unwanted hug" he received from the Congress president in Parliament, and said the coming together of many parties against the BJP will only help the 'lotus' bloom.

"We asked the reasons for their no confidence, but when they failed to give it they ended up giving an unwanted hug," Modi said, referring to Gandhi's embrace in Lok Sabha on Friday.

Addressing a Kisan Kalyan Rally in Shahjahanpur, Modi said: "There is not just one 'dal' (political party) but dal over dal resulting in "dal-dal" (marshy land) which will only help the 'lotus" bloom." Lotus is the election symbol of the BJP. He said the coming together of several parties against the BJP will be an opportunity.

Slamming opposition parties, he said they were running after the prime minister's chair, ignoring the poor, youth and farmers. He used a Hindi expression that translates to more the parties, more the marshy land in which the 'lotus' blooms.

"Are you people satisfied with what happened yesterday in Lok Sabha... Have you come to know who is at fault. They are not seeing the poor and the country but have their eyes only on the PM's chair," he said.

"Have I done anything wrong. I am only working for the poor and the country...fighting corruption and this is my crime," he said.

Accusing previous governments of not having the will to help farmers, Modi listed the key decisions taken by his government for welfare of farmers and criticised the parties who ruled in the past for lacking pro-farmer intentions. He also said that for the first time the government has decided to allow mills to produce ethanol from molasses and sugarcane juice from December 1.

After reaching out to voters in Azamgarh, Mirzapur and Varanasi last week, Modi addressed the rally in Shahjahanpur, the biggest wholesale grain market and also a prominent cane growing district in Uttar Pradesh which sends 80 MPs to the Lok Sabha. This was his third visit to the state in less than a month.

Farmers in large numbers from adjoining districts such as Hardoi, Lakhimpur Kheri, Pilibhit, Sitapur, Bareilly and Badaun attended the rally. Saturday’s rally was Modi's first public address after leading his party to victory in the no-confidence motion moved by the TDP. The BJP-led NDA won the no-trust-vote.