Jaitley urged that in order to resolve the ongoing crisis in J&K, there is a need to end insurgency armed militancy in the Valley. 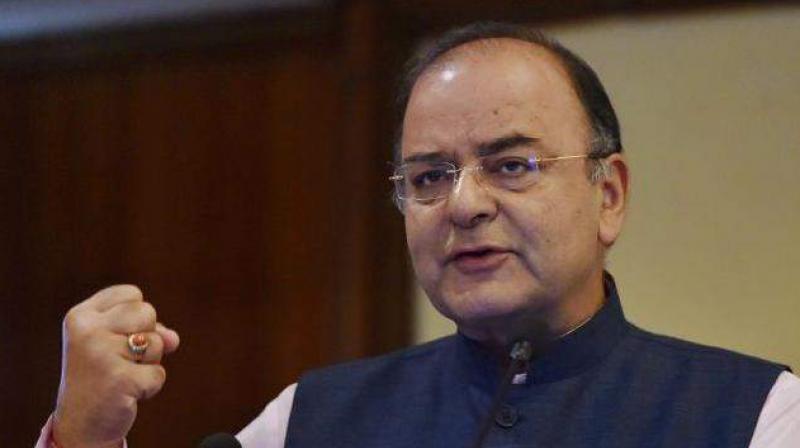 Addressing the gathering at the New India Pledge Programme in Mumbai, Jaitley asserted that with the current 'fund squeeze', the separatists are left with a crunch in their activist numbers. (Photo: PTI/File)

Mumbai: Union Finance Minister Arun Jaitley on Sunday said that following the November 8 demonetisation drive and the recent National Investigation Agency (NIA) crackdown, the separatists are being starved of foreign funding, urging the need to end armed militancy in the Valley.

Addressing the gathering at the New India Pledge Programme in Mumbai, Jaitley asserted that with the current 'fund squeeze', the separatists are left with a crunch in their activist numbers.

"After demonetisation and the NIA enquiry on separatists' foreign funding, there has been a severe fund squeeze. Earlier, on one command, hundreds of people would gather to create commotion and resort to stone pelting. With the current fund squeeze, they are hardly able to gather 25 to 50 people," he said.

Further, Jaitley urged that in order to resolve the ongoing crisis in Jammu and Kashmir, there is a need to end insurgency and armed militancy in the Valley.

"On one hand, we have a neighbour who uses terrorism as a weapon. On top of that, there is also stone pelting, insurgency and ceasefire violation. However, now, our Armed forces are at a dominant position," said Jaitley.

Outlining the shortcomings of the previous government in power, Jaitley assured that under the leadership of Prime Minister Narendra Modi, the Centre is 'ready to take any harsh decisions or risks, keeping national interest in mind.'

"Until over three years ago, there was rampant corruption and lack of decision-making. When Sushma ji and I were leaders of the Opposition, it was an easy job. Regularly, corruption cases emerged, we had to collect data and put before the nation. With Prime Minister Modi's approach, I can assure you that the Centre will not hold back from taking risks and harsh decisions where required," he said.

Highlighting the importance of the Goods and Services Tax (GST) in formalizing trade, Jaitley said the new tax reform coupled with demonetisation and other economic reforms of the recent past will ensure that a stringent system is in place.

Further, Jaitley said real time information will soon be gathered from abroad, following which those who have deposited money abroad to avoid double taxation will have to face strict consequences.

"We have introduced new measures to seize benami property and shell companies. Defaulters will now understand the consequence of non-compliance with the norms. The system in place will ensure strict compliance, and curb any kind of evasion of the law," said Jaitley.