CM Mehbooba Muft was taken off-guard when she received a phone call from governor Vohra about the BJP’s decision to pull out of the govt. 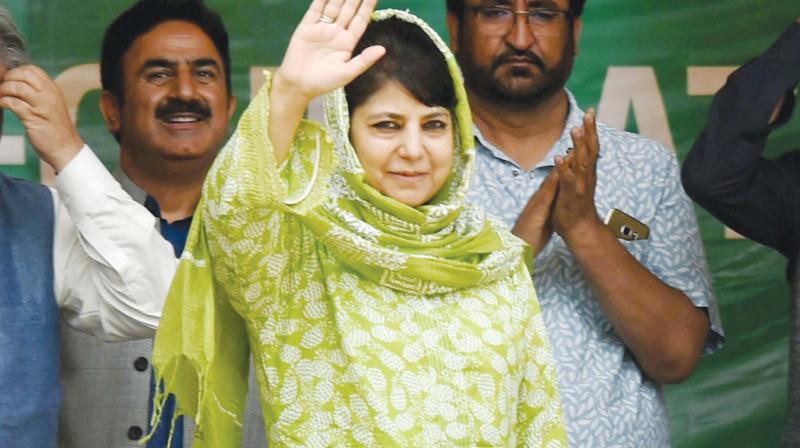 Srinagar/New Delhi: Jammu and Kashmir plunged into political uncertainty and faced the prospect of governor’s rule followed by early elections after the Bharatiya Janata Party suddenly snapped ties with its alliance partner, People’s Democratic Party, on Tuesday afternoon, bringing the two-year-old government down.

The BJP cited rise in “radicalism and terrorism in the state” and the PDP-led government’s failure to contain it as the reason for its decision.

PDP chief Mehbooba Mufti, who was apparently not given a warning by the BJP before it ended the thre-year-old alliance, submitted her resignation from the post of chief minister to governor N.N. Vohra and said that her party was not interested in exploring the possibility of entering into an alliance with any other party to form a new government.

Though Mr Vohra asked her to continue in office till alternative arrangements are made, with the fall of PDP-BJP government and no political party staking claim to form a new one, J&K will, in all probability, be brought under Governor’s rule Tuesday midnight onwards.

On Tuesday evening, governor Vohra forwarded a report to President Ram Nath Kovind on the collapse of the government in the state and the developments that followed it.

As ties between the two unlikeliest of allies in J&K worsened and apparently became “untenable” for the BJP, the saffron party on Tuesday announced its decision to withdraw support to the PDP-led government, saying continuation in the alliance would have “gone against national interest”.

Making the announcement, BJP national general secretary and J&K’s in-charge Ram Madhav said, “It has become untenable for the BJP to continue in the alliance government in the state.” He was flanked by the party’s ministers from the state who had submitted their resignations to the governor.

The BJP accused the PDP-led government of “failing” to “reign in radicalisation” and held it responsible for the “deteriorating law and order situation, attack on freedom of speech and citizen’s fundamental rights”. Sources said that Ms Mufti, who as chief minister had been trying to hold on to the uneasy alliance, was taken off-guard. She was in her office at the civil secretariat in Srinagar when she received a phone call from the governor about the BJP’s decision to pull the plug on her government.

Soon after the alliance government collapsed, a blame-game ensued. While the BJP launched a direct assault on the PDP, the former chief minister, aware that her party now faces the possibility of a political backlash for joining hands with the BJP, preferred to play the victim and tried to keep the focus on her government’s achievements.

Ms Mufti claimed that she was “not shocked” by BJP decision to withdraw support, and, raising the bogey of Article 370 and unilateral ceasefire, she subtly hit out at the Centre saying the “muscular security policy will not work in the state and reconciliation is the key.” She reminded the Modi government that Jammu & Kashmir was not “enemy territory.”

“I am not shocked (by BJP exit). We didn’t do this alliance for power… We did it for some objective. This alliance had a bigger motive — unilateral ceasefire, PM’s visit to Pakistan, withdrawal of cases against 11,000 youth,” she said.

The fact that the chief minister was taken by surprise by the BJP’s decision was corroborated by her predecessor and political bête noire Mr Abdullah. He told reporters in Srinagar that she was sitting in her office “when they pulled the rug out of her chair”.

Later in a tweet, he wrote, “She was cutting ribbons while the BJP was cutting her legs out from under her. How I wish she had left with her head held high & her dignity intact! She was J&K’s CM, not of the BJPDP”.

In the 87-member Jammu and Kashmir Assembly, the PDP has 28 MLAs, the BJP 25, National Conference 15, the Congress 12, and seven seats are held by Independents and other parties including CPI(M).

A Raj Bhavan release said that the governor received a formal letter signed jointly by BJP state unit president Ravinder Raina and its legislature party leader Kavinder Gupta during the day on Tuesday, informing him about the withdrawal of support to the coalition government. This was followed by chief minister Mufti’s resignation.

The governor, the statement said, spoke with Ms Mufti and Mr Gupta, who was also the deputy chief minister in the coalition government, to ascertain whether their respective political parties intended to explore alternative alliances to form the government of the state.

“He was informed in the negative by both the leaders,” it said, adding that the governor also spoke to J&K PCC chief G.A. Mir and later had a meeting with National Conference (NC) vice-president and former chief minister Omar Andullah at Raj Bhavan here.

While Mr Mir informed the governor that his party did not have the numerical strength to form government on its own or in alliance, the NC leader stated that there was no alternative to governor’s rule and elections.

“After concluding his consultations with all the major political parties in J&K governor Vohra has forwarded his report to the President of India for imposition of governor’s rule under Section 92 of the Constitution of Jammu and Kashmir,” the statement said.

After she learnt of the BJP’s decision, Ms Mufti held a brief meeting with her close confidants. After submitting her resignation to the governor, she called another emergency meeting of the PDP to discuss the situation threadbare and chalk out future strategy.

Speculation that the BJP was looking at the possibility of ending the alliance gained momentum when the party high command summoned its state leaders, including deputy chief minister Kavinder Gupta on Monday evening. However, the move to withdraw support was kept under wraps till Tuesday afternoon, when the party finally decided to take the call.

At around 11 am, party chief Amit Shah, Mr Ram Madhav, minister of state, PMO, Jitendra Singh met at the party headquarters in Delhi where it decided to seal the fate of the PDP government. Mr Madhav then called BJP ministers in the state and told them that the party was withdrawing support. The ministers were asked to resign.

Moments after announcing the decision to snap ties with the PDP, the BJP summoned a press meet, where it launched a scathing attack on its former ally. Mr Madhav said that the BJP had joined hands with the PDP to “respect the mandate” and in the last three years it had “tried its best to work towards the state’s objective of the coalition government — peace, development and progress in all the three important regions of the state, Jammu, Ladakh and Kashmir.”

In a bid to justify the decision to announce unilateral ceasefire, Mr Madhav said that the announcement of ceasefire during Ramzan was not Centre’s “majboori (compulsion) but a goodwill gesture.”

The BJP leader then came out with a series of accusation against the PDP and its leader, Ms Mufti. “In spite of all our efforts, we find that the state government has not been effective in addressing the core issues of the state”, he said and added that the “security scenario has deteriorated causing serious concern about the protection of basic fundamental rights of life, free speech among others.” Mr Madhav spoke the murder of Rising Kashmir’s editor Shujaat Bukhari and claimed that the assassinationw was an “indicator to the deterioration of the situation and the extent of radicalisation.”

Saying that the security forces did a “fabulous job” in containing the worsening situation in the state, Mr Madhav pointed fingers at Mufti administration claiming that the “primary responsibility of maintaining law and order, lies with the state which showed severe shortcomings.”