Rahul along with Priyanka, Scindia visits families of Pulwama martyrs in UP

On February 14, jawans of CRPF were killed by a suicide bomber of JeM in Pulwama while they were travelling to Srinagar from Jammu. 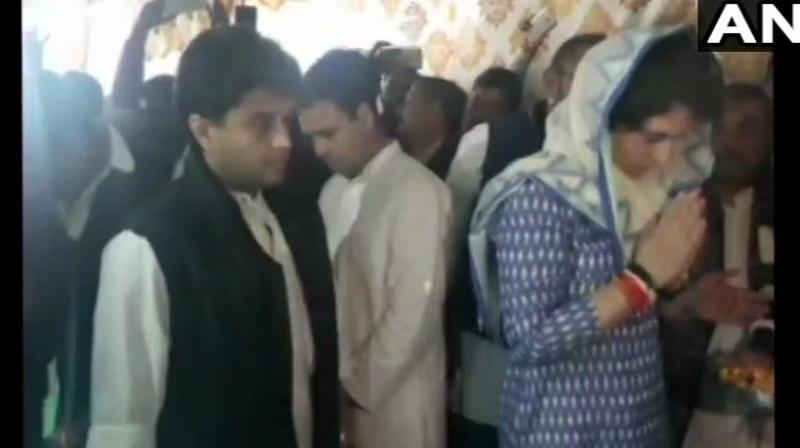 Congress leaders paid their respects to the martyrs and met their family members. (Photo: ANI/ Twitter)

Shamli (Uttar Pradesh): Congress president Rahul Gandhi along with party General Secretaries Priyanka Gandhi and Jyotiraditya Scindia on Wednesday visited the families of Pulwama martyrs—Amit Kori and Pradeep Kumar. The Congress leaders paid their respects to the martyrs and met their family members.

The Congress party has decided to contest all 80 Lok Sabha seats at stake in Uttar Pradesh in the coming Lok Sabha polls after the Samajwadi Party (SP) and the Bahujan Samaj Party (BSP) announced their seat-sharing arrangement without making the Congress a part of their alliance.

The two parties have agreed to contest 38 seats each, while they have announced to not field their candidates from Rae Bareli and Amethi, the two seats currently represented by UPA chairperson Sonia Gandhi and Rahul Gandhi respectively.

On February 14, as many as 40 jawans of CRPF were killed when their convoy was attacked by a suicide bomber of Pakistan-based terror outfit Jaish-e-Mohammad (JeM) in south Kashmir’s Pulwama district while they were travelling to Srinagar from Jammu.