The comments by the top leader come amidst speculations that he might quit the party and chart an independent political course. 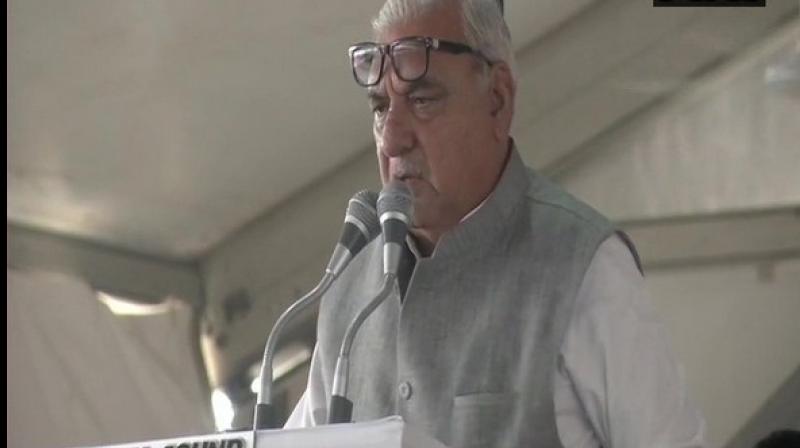 Continuing his tirade against the Congress leaders, Bhupinder Hooda said that like others, he never compromises when it comes to patriotism and self-respect. (Photo: ANI)

Rohtak: Former Haryana Chief Minister and Congress leader Bhupinder Singh Hooda on Sunday came down heavily on his own party leaders for not supporting the abrogation of Article 370, which accorded special status to Jammu and Kashmir.

"When the government does something right, I always support it. Many of my colleagues opposed the Centre's decision to abrogate Article 370. They have lost their way. It is not the same Congress as it used to be," said Hooda, while addressing 'Parivartan Maha rally' here.

The comments by the top leader come amidst speculations that he might quit the party and chart an independent political course.

Continuing his tirade against the Congress leaders, he said that like others, he never compromises when it comes to patriotism and self-respect.

Notably, Hooda had earlier too said that Modi government's decision to repeal Article 370 was a "milestone".

Ahead of the upcoming Assembly polls, he also promised many things to the people. Among these were loan waiver, free electricity to farmers, free bus service to women in Haryana Road Transport Corporation (HRTC) and employment to at least one person in each family.

"If we form the government in Haryana, we will bring a law like Andhra Pradesh so that 75 per cent of the jobs go to the people of the state," he said.

"Rs 2,000 will be deposited in the bank account of every poor housemaker. Those below the poverty line will be given rice and wheat at Rs 2 per kg. Poor people will not have to pay electricity bill if they consume less than 300 units of powers," he said.

His son and former MP Deepinder Singh Hooda said if the Congress comes to power, it will follow the path of love, growth, and development.

"The path that the BJP has shown in the last five years is of riots, unemployment, and intolerance. Today, we have a chance to take back Haryana politics in the direction that will help it grow," he added.

BJP, which is upbeat after its unprecedented success in the Lok Sabha polls, has already started its preparations for the assembly polls.

Party chief Amit Shah announced 'Mission 75' at a rally in Jind on Saturday, and accused the Congress of not repealing Article 370 over the past 70 years.

Earlier in the 2014 elections, the party crossed the halfway mark in the 90-member Assembly by winning 47 seats. The BJP had ousted the two-time Chief Minister Bhupinder Singh Hooda by reducing the Congress to just 15 seats in the state Assembly.