He appealed to people of India to listen to voice of Kashmiris and said problem could be solved only through political discourse. 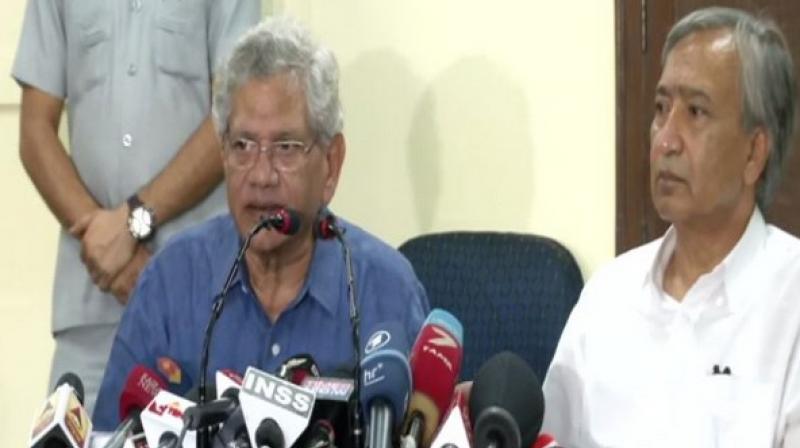 He thanked the Supreme Court and Chief Justice Ranjan Gogoi for permitting having permitted him to visit Kashmir and for allowing Tarigami to come and get treated at AIIMS. (Photo: ANI)

New Delhi: The CPI(M) on Tuesday rejected the Centre's claim of normalcy in Jammu and Kashmir and is planning to move the Supreme Court on the latest situation in the erstwhile state after the government's last month's decisions.

Party General Secretary Sitaram Yechury, who was accompanied by his party leader from Kashmir valley, Yousuf Tarigami, told a press conference that the party was filing a writ petition in the Supreme Court raising all the issues related to the situation in Jammu and Kashmir and the bifurcation of the state into two Union territories.

The court has fixed the first week of October for the hearing on several writs in this matter, he said.

"The real issue over there is of unemployment. For more than 40 days people are unable to earn daily wages. Secondly, the lack of public transport is forcing people who are employed to stay off from their jobs.”

"It is clear that the ground situation is completely the opposite of what the government is claiming, the feeling is that the state has been insulted by bifurcating it into two union territories," Yechury said.

He thanked the Supreme Court and Chief Justice Ranjan Gogoi for permitting having permitted him to visit Kashmir and for allowing Tarigami to come and get treated at AIIMS. The court has said he is free to decide when to return to the valley and what he wants to do," Yechury said.

Concurring with Yechury's statements, Tarigami said he would only speak on what the "average Kashmiri is feeling."

"We have seen difficult times in Kashmir, disruptions, death and everything...l we have seen it all. But this is perhaps the most gloomy time. When I see the very foundation of unity of the people of Jammu and Kashmir with the Union of India is getting assaulted by those who are mandated to protect those, I feel nothing but shocked," he said.

He also appealed to the people of the country to listen to the voice of the Kashmiris and said the problem could be solved only through political discourse.

"I want to appeal to all citizens to India to listen to the voices of Kashmiris. They have been listening to just one version for all this while. The average Kashmiri just wants a chance to march with you. I had told Modi in 2016 too that the Kashmir crisis was not created by soldiers and it cannot be solved by them. It was the blunders of politicians," he said.

Expressing disappointment with the way in which the decisions were taken by the Centre, and what has followed since, Tarigami said, "We did not have many expectations from this regime but we never thought this could become so desperate. They say there is normalcy in Kashmir, 40 days have passed now. Try this anywhere else. Try this in Delhi. Shut off the internet for seven days, disrupt all communications and see what happens."