next meeting of the signatories will be held soon, when the future course of action will be devised and made public thereafter 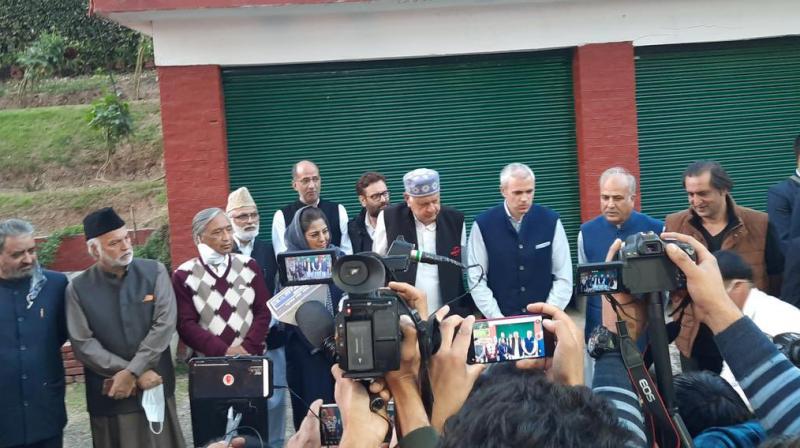 The participants of the meeting

SRINAGAR: The signatories of ‘Gupkar Declaration’ from among Jammu and Kashmir’s mainstream parties held a meeting here on Thursday and named the initiative aimed at fighting for the restoration of the erstwhile state’s special status as ‘People’s Alliance’.

Former chief minister and National Conference (NC) president Farooq Abdullah, at whose house along Srinagar’s Gupkar Road the meeting, the third of the ‘Gupkar Declaration’ signatories, was held said, “Ours is a constitutional battle. We want the Government of India to return to the people the rights they held prior to August 5, 2019.”

‘Gupkar Declaration’ was a pledge for defending Article 370 and 35A of Kashmir’s mainstream parties which they took at a meeting held at  Abdullah’s residence on August 4, 2019, a day before the state was stripped of its special status and split up into two Union Territories (UTs).

Last month, the leaders of NC, PDP, Peoples Conference (PC), Awami National Conference (ANC), CPIM and Congress had after the second meeting of the signatories issued a joint statement here saying that they are “wholly bound” by the “Gupkar Declaration” and “will unwaveringly adhere to it.”

On Thursday, all the signatories barring J-K PCC chief Ghulam Ahmad Mir attended the meeting and renamed the grouping as “Peoples’ Alliance for Gupkar Declaration”. Abdullah told reporters, “Our motive is to fight for the restoration of the pre-August 4, 2019 position. We will also fight for the rights that were snatched last year from J-K. Further, we want that the steps be taken for the resolution of Kashmir issue and all the stakeholders should be taken on board in this regard.”

He also said that the next meeting of the signatories will be held soon, when the future course of action will be devised and made public thereafter.

Mir told a local news agency that he could not attend the meeting due to a medical emergency and had already conveyed it to Senior Abdullah. Hakeem Muhammad Yaseen, chairman of People’s Democratic Front (PDF), said that he supported the ‘Gupkar Declaration’ in letter and spirit but he could not attend Thursday’s meeting on health grounds.