UNSC closed-door meeting a diplomatic failure, Modi should get it cancelled: Cong

Singhvi said Jammu and Kashmir and Ladakh were 'integral, inalienable, untouchable' parts of India and nobody can state to the contrary. 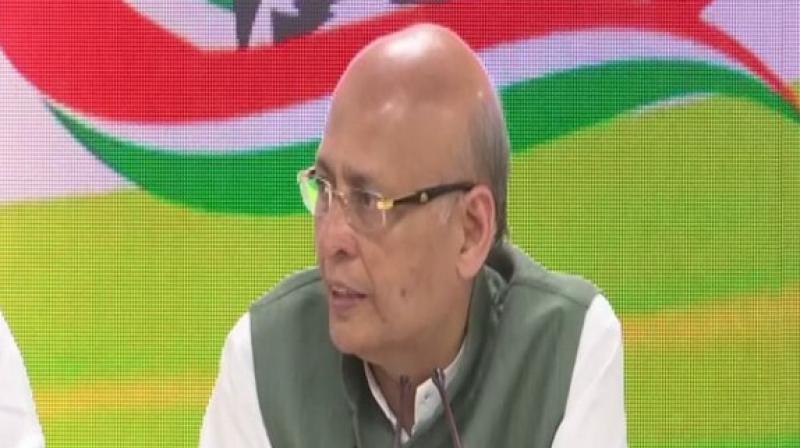 The Congress on Friday said that the United Nations Security Council (UNSC) holding a closed-door consultation on Kashmir developments was a "diplomatic and strategic" failure of the BJP-led government and urged Prime Minister Narendra Modi to call his friends in the Security Council to get the meeting cancelled. (Photo: File)

New Delhi: The Congress on Friday said that the United Nations Security Council (UNSC) holding a closed-door consultation on Kashmir developments was a "diplomatic and strategic" failure of the BJP-led government and urged Prime Minister Narendra Modi to call his friends in the Security Council to get the meeting cancelled.

Talking to media persons here, Congress spokesperson Abhishek Manu Singhvi said the closed-door meeting, called at the behest of China, was "a matter of great concern to the entire nation".

"We are extremely disturbed, indeed shocked, at what we see happening at the UN supposedly at 7.30 IST. We view it as a matter of great concern to the entire nation, to every citizen of India," he said.

Singhvi said Jammu and Kashmir and Ladakh were "integral, inalienable, untouchable" parts of India and nobody can state to the contrary.

"This is a non-negotiable issue, non-discussable issue as far as India is concerned," he said.

Singhvi said it shocking that after several decades "this is sought to be internationalised at the UNSC on Friday".

"We are not misled by all these noises about open-door, closed-door... There is no such thing as closed-door in the internationalisation of such issues," he said.

Singhvi said that External Affairs Minister S Jaishankar was in China and the neighbouring country had the guts to approach the UN Security Council.

"Foreign Minister is in China discussing this very issue there. Our diplomats are being mollycoddled by the Chinese and while they are served tea and cakes, under the nose of Modi government, China has guts to approach the UN, which is having its meeting," he said.

He said the government has been giving the impression that China was "going along with us".

"Under the nose of the Modi government, while hosting our Foreign Minister, Chinese gets this meeting organised. Is it not a strategic failure for India apart from being diplomatic faux pas of the highest order. I implore, besiege the PM not to remain silent and implore all our friends, anyone of them in the UNSC to have this meeting cancelled," he said.

He said the issue was "not discussable, not open for discussion".

Referring to the re-organisation of Jammu and Kashmir into two union territories and repeal of Article 370, he said: "What we do we with laws is internal".

"We are also deeply concerned about the fact that something which has not happened for decades allowed to happen without any real protest from the government," he added.

The UNSC is to hold closed-door consultations on the Kashmir developments on Friday at the request of China.

The diplomat said that China's request for the meeting was made in a letter and came up during the Council's informal consultations on Wednesday.

The format of the meeting as a closed-door consultation would preclude Pakistan participating in it.

Pakistan had asked for a meeting of the UNSC on Kashmir following India's decision to rescind Articles 370 and 35A of its Constitution that gave Jammu and Kashmir a special status.

Except for China, all the other four permanent members of the Council have openly backed New Delhi's position that disputes between India and Pakistan are bilateral matters, with the US even saying that the Kashmir developments are an internal matter of India.