‘Gupkar Declaration’ is a pledge of Kashmir’s mainstream parties which they took at a meeting on August 4, 2019 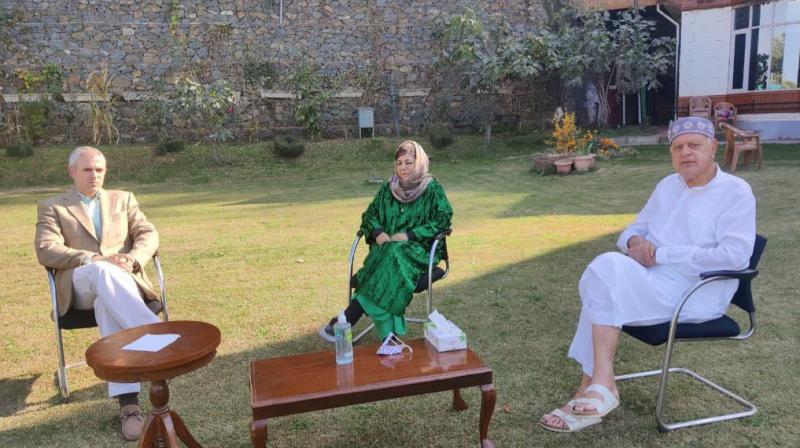 SRINAGAR: Jammu and Kashmir’s mainstream political icons and former chief ministers, Farooq Abdullah, Omar Abdullah and Mehbooba Mufti, have resolved to put up a joint front along with other like-minded political parties and leaders against the Centre’s “onslaught” against the erstwhile state’s unique identity, the political and economic interests of its people and for seeking restoration of the special status it enjoyed prior to August 5, 2019.

The Abdullahs on Wednesday called on People’s Democratic Party (PDP)'s Mehbooba at her official residence here to briefly discuss the contours of a broader alliance, the foundation of which would be the ‘Gupkar Declaration’.

‘Gupkar Declaration’ is a pledge of Kashmir’s mainstream parties which they took at a meeting held at Senior Abdullah’s residence along Srinagar’s Gupkar Road on August 4, 2019, a day before the state was stripped of its special status and split up into two Union Territories (UTs).

It had warned the Centre that abrogation and even modification of Articles 35A and 370 of the Constitution and delimitation or trifurcation of the state would be seen as an “aggression” against its people and fought tooth and nail. The meeting had also unanimously declared that all the parties would be united in their resolve to protect and defend identity, autonomy and special status of the J-K against all “attacks and onslaughts”.

Last month, the leaders of National Conference (NC), PDP, Peoples Conference, Awami National Conference, CPIM and Congress issued a joint statement here saying that they are “wholly bound” by the “Gupkar Declaration” and “will unwaveringly adhere to it.” Earlier the NC’s political affairs committee had authorized its president Farooq Abdullah “to widen the acceptance of the ‘Gupkar Declaration’ among all the sections in Kashmir, Jammu and Ladakh”.

The signatories of the declaration are scheduled to meet at Farooq Abdullah’s residence on Thursday afternoon to discuss their future strategy. Mehbooba who could not attend the last meeting will also participate in the deliberations, the PDP and NC sources said. This will be the third meeting of the political parties which are part of ‘Gupkar Declaration’.

Omar Abdullah tweeted, “My father & I called on @MehboobaMufti Sahiba this afternoon to enquire about her well-being after her release from detention. She has kindly accepted Farooq Sb’s invitation to join a meeting of the Gupkar Declaration signatories tomorrow afternoon”.

Mehbooba retweeted Abdullah’s tweet with her comment, “It was nice of you & Farooq sahab to come home. It gave me courage listening to him. I’m sure together we all can change things for the better”.

Soon after her release from a 14-month-long detention on Tuesday night, Mehbooba had in an audio message put on her Twitter handle sought restoration of J-K’s pre-August 5, 2019 constitutional position and resolution of the Kashmir issue.

The 61-year-old leader termed  August 5, 2019 as a "black day" in the history of J-K and the move by the Central government on that day as "black" and said it continued to smack her heart and soul during her incarceration. She acknowledged all the people of J-K “must have been passing through the same situation”.

She said, "None of us will ever forget the dacoity committed and dishonour shown to us on that day. Now everyone has to renew and reiterate our pledge to fight for the return of what was snatched from us undemocratically, unconstitutionally and illegally by Delhi darbar on August 5 last year".
Seeking an urgent resolution of the Kashmir problem, for which, she said people have rendered enormous sacrifices, she asserted though this was not an easy task ahead she was quite confident that the unwavering and determination of the people will make the journey easy.

Mehbooba was among hundreds of politicians and other activists taken into preventive custody ahead of abrogation of Article 370 on August 5 last year.

Many of these leaders and activists, including the PDP president were subsequently formally detained under J-K’s stringent Public Safety Act (PSA). Most key political figures, including two other former chief ministers Farooq Abdullah and Omar Abdullah, were freed earlier this year. However, Mehbooba remained incarcerated even after being shifted to her home in capital Srinagar, which had been declared a ‘subsidiary jail’ in April this year.