Earlier in 2014, Modi had welcomed the Chinese President at Ahmedabad. 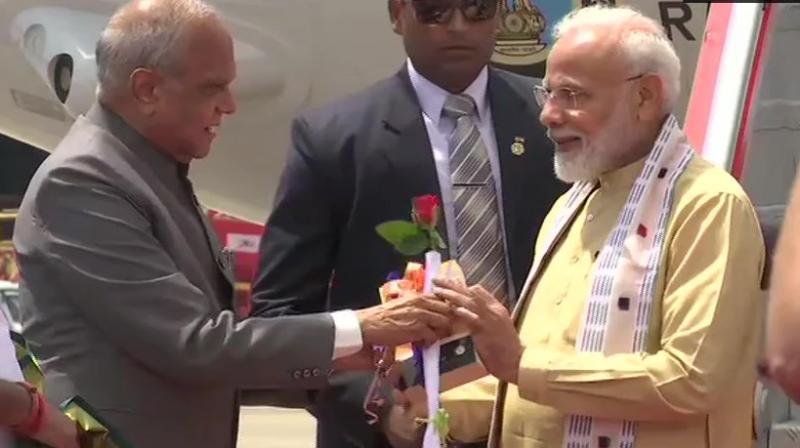 Mamallapuram: Chinese President Xi Jinping arrived in Chennai, Tamil Nadu on Friday for his second informal summit with Prime Minister Narendra Modi in Mamallapuram town, which is scheduled to begin soon. However, the Chinese President was wlcomed by the state Governor Banwarilal Purohit.

Earlier in the day, Prime Minister Narendra Modi reached Thiruvidanthai village near Kovalam town, where he was received by Tamil Nadu Minister K Pandiarajan. From here, he went to his hotel -- Taj Fisherman's Cove Resort.

Xi will be accompanied by China's Foreign Minister Wang Yi and Politburo members on his visit to India. From the Indian side, National Security Advisor (NSA) Ajit Doval and EAM S Jaishankar will accompany the Prime Minister.

Security has been heightened in Mamallapuram ahead of the second informal summit between Prime Minister Narendra Modi and Chinese President Xi Jinping that is scheduled to take place here on Friday.

Indian Coast Guard ships were deployed in the waters near the Shore Temple -- the second century -- old granite architecture built by the Pallava kings.

According to Indian government sources, the Indian Navy and the Indian Coast Guard have deployed warships at some distance from the seashore to provide security from any seaborne threat to the meeting between Prime Minister Modi and President Xi.

The historic coastal town of Mamallapuram will provide the setting for the meeting between Modi and Xi as the two leaders will have tete-a-tete as also delegation-level talks to strengthen bilateral ties.

The summit will provide an opportunity to the two leaders to continue their discussions on overarching issues of bilateral, regional and global importance and to exchange views on deepening India-China Closer Development Partnership, the Ministry of External Affairs said in a statement.

They will have guided tour of three monuments -- Arjuna's penance, an intricately carved ancient sculpture; Krishna's Butter Ball -- a big round boulder perched on a slope; and Pancha Rathas -- a five chariots monument complex.

No Memorandum of Understandings (MoUs), agreements would be signed or joint communique issued.

The two leaders had their first inaugural informal summit in China's Wuhan on April 27 and 28 last year.

The visit comes at a time when China has openly extended its support to Pakistan in raising the matter of abrogation of Article 370. China had criticised India's decision on Kashmir and its foreign minister raised it at the UN General Assembly last month.

China has used every possible opportunity to criticise India over the Kashmir issue. India has maintained that the abrogation of Article 370 is an internal matter of India.

On Wednesday, a joint statement following the meeting between Xi and Khan in Beijing said that China is "paying close attention to the current situation in Jammu & Kashmir" and that the matter should be "properly and peacefully resolved based on the UN Charter, relevant UN Security Council resolutions and bilateral agreements."

A report by Xinhua said that Xi told Khan during the meeting that China was paying close attention to the Kashmir situation and the "facts are clear".

India took exception to references concerning Kashmir following talks between Xi and Khan and said it is not for other countries to comment on "internal affairs of India".

The forthcoming Chennai Informal Summit will provide an opportunity to the Chinese President and PM Modi to continue their discussions on overarching issues of bilateral, regional and global importance and to exchange views on deepening India-China Closer Development Partnership, the External Affairs Ministry said in a statement. This summit will mostly be similar to the first, held on April 2018 in Wuhan, China.

Xi will arrive at the Chennai International Airport on Friday afternoon, while the Indian Prime Minister will reach the city shortly before noon. The two leaders will meet in Mahabalipuram in the evening and visit some UNESCO world heritage sites.

They will have guided tour of three monuments -- Arjuna's penance, an intricately carved ancient sculpture; Krishna's Butter Ball -- a big round boulder perched on a slope; and Pancha Rathas -- a five chariots monument complex.

The historical city also has a China connection and has had ancient maritime links with the country during the Pallava dynasty.

Mahabalipuram was a major port city in the 7th century and served as a gateway for import and export of goods from and to South India.

A cultural programme will be organised in honour of the visiting leader at the Shore Temple on Friday evening. Modi will then host the Chinese President for dinner.

On Saturday, Modi and Xi will have one-to-one meeting followed by delegation-level talks.

No Memorandum of Understandings (MoUs), agreements would be signed or joint communique issued.

The objective of the meeting is likely to be the exchange of views on regional and global issues, finding a broad pathway on bilateral relations, and discussing ways to build better connections between the two countries.

Issues pertaining to trade increased market access for products like soybean and non-basmati rice, as well as terrorism, sourcing, financing, and origins of terror are expected to come up during the talks.

Shortly before Xi's departure for Nepal, Modi will host lunch in honour of the Chinese President on Saturday afternoon.

This is not the first time that the Prime Minister is hosting Xi outside the national capital. In 2014, Modi had welcomed the Chinese President at Ahmedabad.