Manipur would be the third state after Assam and Arunachal Pradesh in North East, where BJP would form the govt. 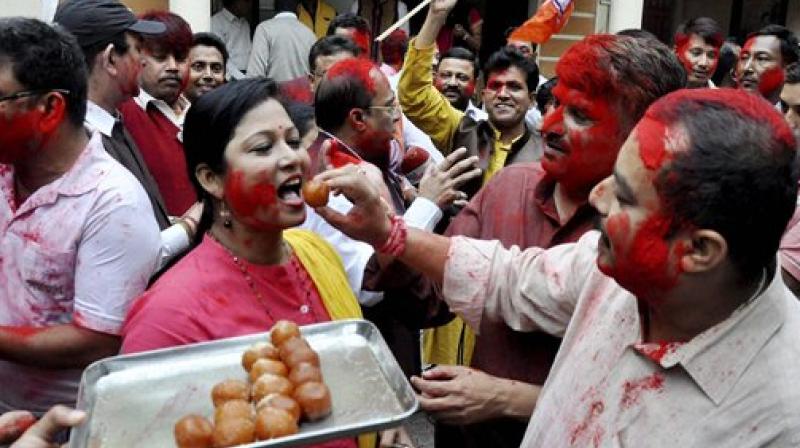 Imphal: The close fight between Congress and BJP for power in Manipur finished with neither party being able to achieve a majority, resulting in a hung Assembly in the state.

Congress, who had ruled the state for three terms won just 28 seats out of 60, whereas BJP, which failed to bag even a single seat in 2012 elections turned out to be the second largest party after Congress with 21 seats.

BJP is now 9 seats away from forming a government in Manipur. The LJP (1) which already has an alliance at Centre with the BJP, and NPF (4) in Nagaland may join the saffron party in government formation.

This is would be the third state after Assam and Arunachal Pradesh in North East, where BJP would form the government.

Irom Sharmila, who was on fast for 16 years to repeal AFSPA from the state, was fighting from 5 seats with newly launched party Peoples’ Resurgence and Justice Alliance (PRJA). Irom merely received 90 votes in her debut Assembly polls. Subsequently, she declared her intention to quit politics.

The star campaigner for the state, Prime Minister Narendra Modi during election rallies had promised to break the economic blockade which the state faces under the Congress regime, if voted to power.

The exit polls for Manipur had thrown up an uncertain mandate. C-Voter- India TV said the BJP would emerge as single largest bagging at least 28 seats, whereas Axis – India Today predicted Congress will retain power with full majority.

Congress emerged as the lone giant in Manipur Assembly Polls in 2012 and achieved a hat trick win by securing 42 of the 60 seats in the state. It was sweet victory for Chief Minister Okram Ibobi Singh as the party got 42.42 per cent vote share.

All India Trinamool Congress (AITC) came second with 7 seats and 17% vote share. BJP could not make a mark in the state and did not win a single seat.