Quoting a popular verse of nationalist poet Subramania Bharathi, he said the bard may have sung it 'bearing Modi in mind.' 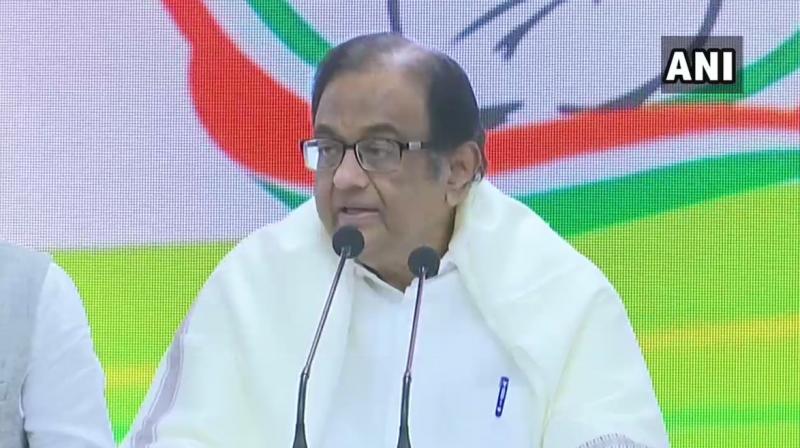 Senior Congress leader P Chidambaram on Saturday hit out at the Centre over the Kashmir issue and spiralling onion prices and accused the BJP of targeting political rivals and said he will neither buckle or fall under pressure nor join the ruling BJP. (Photo: File)

New Delhi: Senior Congress leader P Chidambaram on Saturday hit out at the Centre over the Kashmir issue and spiralling onion prices and accused the BJP of targeting political rivals and said he will neither buckle or fall under pressure nor join the ruling BJP.

He said: “As we speak now, freedom is denied to 75 lakh people in the Kashmir valley,” adding, if freedom of one person was denied, it meant denying it for all the people.

“Freedom cannot be separated, yours is mine and mine is yours and if I do not protect your freedom, you cannot protect mine,” he said on his arrival here from Delhi.

After being in Tihar jail and in the custody of CBI and the Enforcement Directorate for 106 days, he was released on December 4 following grant of bail by the Supreme Court in a money laundering case filed by the ED.

After he was given a rousing welcome by Congress workers, Chidambaram told reporters: “In this country, a right wing, retrograde (government) is moving towards a fascist type of government that usurped freedom...we have to be very vigilant.” The country will become truly independent only when the people in the rest of the nation showed south India’s vigil and in particular Tamil Nadu’s caution in opposing the BJP, he claimed.

On his case, he said he will not talk about it, adding, "Why I was imprisoned? They (the Centre) thought of wrecking my mental strength and it will not happen any day. If anybody had thought that I will fall, I will never fall as the Congress party and the Indian people’s thirst for freedom are behind me...it is going to be a fight continuously,” he said.

Chidambaram also accused the government of trying to wreck his physical health, adding they succeeded for about 10 days.

After the court’s intervention and examination by doctors, “today (my) health has more or less improved fully,” he said.

Asked about Union Minister Prakash Javadekar’s charge that he has violated his bail conditions, he said: “Prakash Javadekar does not know about the (Supreme Court) court’s verdict and he also does not about what I had spoken.” Later, addressing a public meeting at the Congress party’s State headquarters here he said: “This morning, the price of onion in Delhi was Rs 200 a kilo, while a farmer in Maharashtra producing it gets Rs seven a kg for it. We should talk only about that.” He alleged that BJP’s objective was to “strangulate the voice of freedom” and the ruling party had been working towards it by targeting rivals by filing cases against them.

“Newspapers should not write, television channels should not debate,” he said adding the ruling party’s goal was also to not allow “political leaders” (rivals) to criticise it.

To ensure implementation of its agenda, the ruling party at the Centre was bent on “strangulating” their voices, he alleged.

Similarly, TDP’s C M Ramesh and Y S Chowdary, who were the “left and right hands” of party chief Chandrababu Naidu had earlier this year joined the saffron party.

“Both of them have cases against them and both are today in the BJP,” he said.

Sarcastically, Chidambaram likened the BJP to river Ganga, a dip in which is believed to cleanse devotees of their sins.

“The BJP is River Ganga and all sins will vanish after taking a bath in it. I will never take a bath in that Ganga (the BJP).

I will bow before justice and judge, I will never bend before injustice,” he said, apparently indicating that he will not buckle under pressure and join the BJP.

Making light of his incarceration, he said “spending 106 days in jail” was nothing big when compared to the incarceration of leaders of the freedom movement, including Jawaharlal Nehru. “I happily accept my imprisonment,” he said.

Quoting a popular verse of nationalist poet Subramania Bharathi, he said the bard may have sung it “bearing Modi in mind.” The part of the verse, which Chidambaram emphasised can roughly be translated as, “I will not go down (fall) like some amusing people...”, which is seen as directed at Prime Minister Narendra Modi and his party.

“Till such time you (people) are there, the Congress party, which won us freedom, is there. Till the memory of freedom fighters like Gandhiji, Nehru, Tilak, Sardar Patel, Kamaraj, V O Chidambaram Pillai lingers...you thought that I will fall ? No, never,” he said.