Centre scrapped Article 370 of Constitution that gave special status to J&K and barred people from rest of India from buying property there. 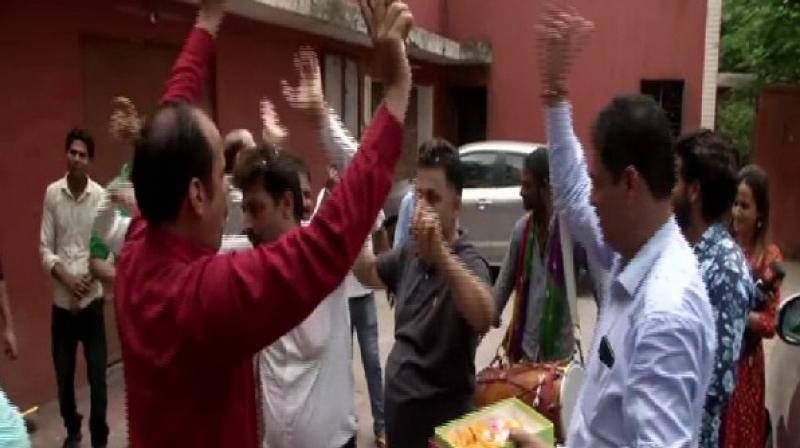 Many Kashmiri Pandits were killed and a large number was forced to flee from the Valley during the 1990s due to the eruption of militancy, following persecution and threats by radical Islamists and militants. (Photo: ANI)

New Delhi: Displaced Kashmiri Pandits living in the national capital hailed the central government's "historic" decision of scrapping Article 370 of the Constitution and several took to the streets to celebrate the move on Monday.

People were seen celebrating, dancing and distributing sweets on the roads in Lajpat Nagar area.

"Scrapping Article 370 is a historic decision by the Modi government. The minority community of Kashmiri Pandits will benefit from this move," president of the Kashmiri Samiti in Delhi, Sumeer Chrungoo, told ANI.

He said that the people who were forced to leave Kashmir will finally be able to go back to the valley.

"Political leaders and Pakistan have exploited the special status law for their own interests. Now Kashmir will be inducted into the mainstream society of the country and prosper," said another Kashmiri Pandit.

Earlier today, the Centre scrapped Article 370 of the Constitution that gave a special status to Jammu and Kashmir and barred people from the rest of the country from buying property there.

Shortly after Home Minister Amit Shah tabled a resolution to this effect in Rajya Sabha, President Ram Nath Kovind came out with a notification -- The Constitution (Application to Jammu and Kashmir) Order, 2019 that will come into force immediately.

"Now that Article 370 has been scrapped, the militancy in the region will come to an end. Separatists have been given a befitting reply. Now the economy will flourish and the country will unite," another Kashmiri Pandit said amid celebrations.

Many Kashmiri Pandits were killed and a large number was forced to flee from the Valley during the 1990s due to the eruption of militancy, following persecution and threats by radical Islamists and militants.